The political party formed by billionaire Clive Palmer, The United Australia Party, has voted to reject the application of former Speaker Peter Slipper after the controversial federal MP attempted to register as a party member this week. 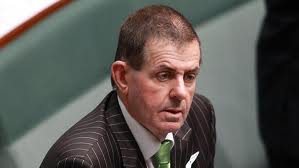 THE United Australia Party, formed by billionaire Clive Palmer, has voted to reject the application of former Speaker Peter Slipper after the controversial federal MP attempted to register as a party member this week.

The recently formed party initially believed that it would be forced to accept Mr Slipper as a member due to strict guidelines designed to prevent political organisations from discriminating against potential members on the basis of race, gender or social class. Australian Electoral Commission rules state that an individual may only be denied registration with a political party if they have been convicted of a crime or are already the member of another party.

Susie Douglas, UAP candidate for McPherson and a member of the party’s executive, announced on Saturday night that a clause in the UAP constitution allowed for potential party members to be rejected if a majority of foundation members agreed to deny the registration. She said that the UAP’s founding members had decided to invoke this clause and reject Mr Slipper’s application.

Prior to announcing Mr Slipper’s rejection, Mrs Douglas posted on the UAP’s Facebook page claiming that the party had been placed in a difficult position by the Independent MP’s attempt to sign up, with the UAP unable to prevent Mr Slipper’s application without contravening AEC guidelines.

Mrs Douglas wrote: “I have been over at Clive’s tonight and he has rung a few people to talk them through the issue of accepting Mr Slipper’s application to join the party. He is aware of what the public opinion is and he completely agrees with it, however he has to abide with the laws that restrict the party’s capacity to discriminate against someone. As it stands the only way the party can reject someone’s membership is if they are currently a member of another party or they have a conviction recorded against them.

“At present Mr Slipper is not a member of another party nor does he have a conviction recorded against him. He is not standing as a candidate for his seat as an endorsed member of this party. Mr Slipper will be up against a great candidate of our party, Mr Bill Schoch. We feel that this is one of many issues that as unpleasant as it is can only make us stronger. At the end of the day we have to abide by the law.”

Mr Slipper has served as MP for the Queensland electorate of Fisher since entering parliament in 1993. He acted as the Speaker of the House of Representatives between 2011 and late 2012 before being forced to resign under allegations that he had abused his parliamentary travel allowances and sexually harassed male staffer James Ashby.