The federal coalition would be happy to accept the vote of the MP it tried to disendorse and sack as Speaker, Opposition Leader Tony Abbott says. 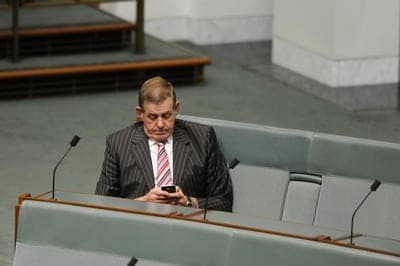 THE federal coalition would be happy to accept the vote of the MP it tried to disendorse and sack as Speaker, Opposition Leader Tony Abbott says.

Mr Abbott made the overture on Wednesday as Peter Slipper sat for the first time on the crossbench following his emotional resignation as the federal parliamentary Speaker on Tuesday night.

It also emerged independents Tony Windsor and Rob Oakeshott didn’t vote for the opposition motion to sack Mr Slipper – which failed by one vote – because he agreed to quit voluntarily.

Mr Windsor and Mr Oakeshott believed the release of a text message comparing female genitalia to “shell-less mussels” sent by Mr Slipper to staffer James Ashby – who is taking the former Speaker to court over alleged sexual harassment – made his role untenable.

Deputy opposition leader Julie Bishop accused Labor, Mr Oakeshott and Mr Windsor of making “another grubby political deal” by allowing the Queensland independent to resign rather than be sacked by parliament.

But Mr Abbott told reporters in Canberra he would have no problem accepting Mr Slipper’s vote, despite describing him on Tuesday as “no longer a fit and proper person” to be Speaker.

The Opposition Leader has repeatedly chastised the government for accepting the “tainted” vote of former Labor MP and now independent, Craig Thomson, and once tried to run from the house when Mr Thomson sided with the coalition.

However, Mr Abbott said there was a “fundamental difference” between accepting Mr Slipper’s vote and accepting the vote of Mr Thomson, a former Health Services Union national secretary, who denies allegations he used union funds to pay for meals, accommodation and prostitutes.

“Craig Thomson has been found by a quasi-judicial body (Fair Work Australia) to have misappropriated some $500,000 in low-paid union members’ money,” Mr Abbott said.

“How (Mr Slipper) votes is up to him, but if he chooses to vote with the coalition we certainly would be happy to have that vote.”

Mr Slipper, who has apologised for the texts, is waiting to see if the Federal Court in Sydney will grant his application for Mr Ashby’s case to be thrown out as an abuse of process.

The elevation of Labor MP Anna Burke as Speaker and Mr Slipper’s move to the crossbench makes securing a majority in parliament slightly more difficult for the minority Labor government.

While Mr Slipper’s first vote on Wednesday was for a government motion, his background as a former member of the Nationals and Liberals could prove a problem for Labor.

Meanwhile, as Prime Minister Julia Gillard was praised in global media on Wednesday for attacking Mr Abbott’s “misogyny” during the sacking debate, Mr Abbott said it was time for Labor to stop playing the gender card.

Asked about the coverage, Ms Gillard told reporters: “I made my speech in parliament yesterday because I formed a view that enough is enough.”

“I’ve had enough, Australian women have had enough. When I see sexism and misogyny I’m going to call it for what they are.”

During question time on Wednesday, Mr Abbott apologised for calling Ms Gillard a “piece of work” across the chamber.