Please can idiots like Trenton Oldfield spare us all the frustration of being exposed to your petty and pointless attempts at ‘protest’. 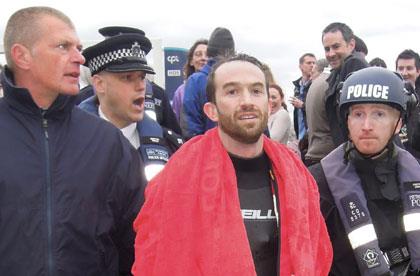 THAT bloody idiot who jumped in the Thames. ‘Just another selfish, deluded, egotistical twat’ was my initial response.

The smug grin that Trenton Oldfield displayed as he was led away by police, after successfully disrupting the 158th University Boat Race in London said it all. It is genuinely difficult to believe anything other than that the Australian-born man is like so many protesters in the 21st Century; rebels without a cause.

First raced in 1829 the Boat Race is one of the oldest sporting events in the world. The race is held between Putney and Mortlake on the River Thames and is an incredible event. Watched by thousands along the banks, millions more tune in to watch on television.Cambridge eventually went on to win the race following a restart, taking their tally to 81 wins while Oxford trail on 76.

When quizzed by a media outlet following his subsequent arrest, Oldfield said: “It was a protest against the cuts and the enclosure of our lives as a result of the destruction of public services. Our lives are being disrupted and we have to be ready to protest… democracy needs rebooting.” His grievance is that “elitism leads to tyranny”.

But after the privately educated 35-year-old was thrown into the global spotlight by the world’s media, The Hard Word once again found itself asking the question; ‘what is the point, what has he achieved?’.

Yes the race is undoubtedly posh, but so what? It is a spectacle as much as anything else, and is the culmination of months of hard work by young men at their peak of their abilities.Oxford’s bowman Alex Woods can testify to just how gruelling this four mile course is, collapsing at the conclusion of the race.

Rowing as a sport has never really captured the attention of news editors. Perhaps that is one reason why it is perceived by the Oldfield’s of the world as some type of toff’s free-for-all. Unbeknown to most (myself included) it is plain to see that the elitism of the sport (some of the brightest students in this country competing from two of the world’s best universities) has not advanced the cause of a disenchanted few who cry foul whenever the race is conducted, but rather has increased immensely the physical strength and prowess of those competing. The same goes for any sport. Elitism is essential to excelling in any sport. Only the best will succeed.

Just like the anti-capitalist Occupy protesters atSt Paul’s Cathedral banging on about social and economic inequality. The sad thing was the small few that actually protested had a very valid point, but their method was useless and achieved nothing. Just like those who looted stores, burned shops and raided the very fabric of this great city last year – protesting about social inequality (so they would have us believe). Or was it just an opportunity for a selfish smash-and-grab?

The 35-year-old will appear in the Feltham Magistrates Court on 23 April, charged under the Public Order Act. His actions are now a matter for the courts.

But please can idiots like him spare us all the frustration of being exposed to your petty and pointless attempts at ‘protest.’