The son of former NSW Labor minister Eddie Obeid told a neighbour his family stood to make $100 million from buying a rural property opened up to mining by former NSW resources minister Ian Macdonald, a corruption inquiry has heard. 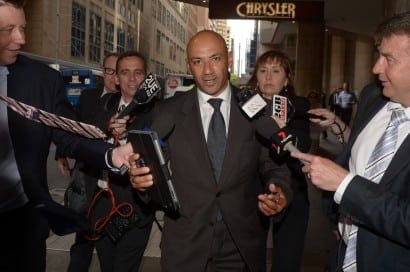 THE son of former NSW Labor minister Eddie Obeid told a neighbour his family stood to make $100 million from buying a rural property opened up to mining by former NSW resources minister Ian Macdonald, a corruption inquiry has heard.

The revelation came on the second day of Independent Commission Against Corruption Inquiry (ICAC) hearings into Mr Macdonald’s 2008 decision to open the Bylong Valley in central NSW to coal mining and how it benefited Mr Obeid.

Mr Macdonald is accused of doing the bidding of the Obeid family, who hid their involvement through complex trust and company structures.

On another sensational day, a former neighbour and friend of the Obeid family, Nicole Fitzhenry, said Eddie Obeid’ son Moses told her his family stood to make $100 million from buying the property known as Cherrydale.

She said the conversation was one of many that occurred with Moses at her home in Sydney’s Elizabeth Bay in the months after the property was purchased in late 2007.

“(Moses) said everything was going ahead and it was going to be a huge windfall for the family,” Ms Fitzhenry told the inquiry.

“He said basically that they were going to make $100 million.

“He said that it was something to do with coal, leases on the farm, and that they would be making a lot of money.”

Mr Macdonald had also been mentioned in the conversations about the Cherrydale Park property.

“Basically it was just, `Ian’s going to help Dad out’,” she said.

Moses had advised her to buy a property next to Cherrydale because “we’d make a lot of money … from the mining,” Ms Fitzhenry told the inquiry.

In one of the day’s more bizarre moments, Ms Fitzhenry said she came home on one occasion to find four men, including Eddie Obeid, Moses Obeid and an unnamed NSW minister having a meeting in her kitchen.

“There were two reasons. One, because it was noisy … and two, they preferred to do it somewhere where people weren’t used to seeing them”.

In his evidence, Ms Fitzhenry’s husband Peter said Moses Obeid told him that buying Cherrydale “would be a life-changing experience”.

“That made me feel very uneasy.”

Former premier Morris Iemma told the hearing it was “unusual” that Mr Macdonald had limited the tender process to smaller miners.

The decision, relating to coal resources worth hundreds of millions of dollars, should have been raised with cabinet, something Mr Macdonald failed to do, Mr Iemma said.

Nathan Rees, who succeeded Mr Iemma as premier, told the inquiry he would have been “concerned” if he had known Mr Macdonald had limited the tender for the exploration licences to smaller miners.

If he had been aware of Mr Macdonald’s actions, Mr Rees said, there would have been a “spirited discussion” about whether it was “going to deliver the best result for the people of NSW”. – AAP