NSW firefighters race against the clock ahead of another heatwave

A two-day weather lull has given NSW firefighters precious time to contain the vast majority of 120 fires before heatwave conditions return on Friday. 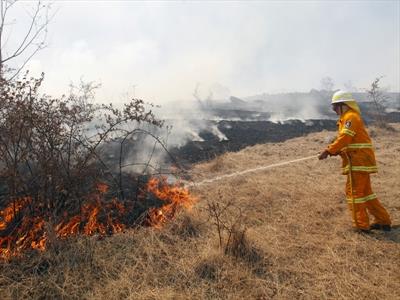 NSW firefighters are racing against time to contain problem fires before another explosion of scorching weather.

Making the most of cooler conditions, they got on top of the fires to such an extent on Thursday that there were no emergency or “watch and act” alerts in force.

Of the 120 fires still burning in the state, only 17 remained uncontained.

But the Bureau of Meteorology forecast a return to heatwave conditions across large parts of the state from Friday, after a two-day lull.

“It is going to be hot,” he said, with temperatures expected to be in the low to mid 40s on Friday, and the mid and high 40s in western areas on Saturday.

The RFS has declared a statewide total fire ban will be in place for Friday.

The one piece of welcome weather news for firefighters was the prospect of lighter winds, after gusts of 70km/h and more hampered their efforts earlier this week.

“Fortunately, at this stage, all the indicators are we’re not expecting the sorts of catastrophic conditions that we experienced back on Tuesday,” said Mr Fitzsimmons.

But he warned wide areas of the state would experience high, severe and even extreme fire danger conditions.

That included northern NSW, the Great Dividing Range, the eastern seaboard and the Riverina.

So far only one house has been lost in the fires, at Yarrabin in the Cooma-Monaro region, but around 370,000 hectares have been burnt and an estimated 10,000 sheep worth $1 million have died.

More than 100 firefighters were working to contain the Deans Gap fire south of Sussex Inlet, in the Shoalhaven.

It has burned through 5700 hectares and coastal village residents have been urged to remain vigilant as the fire risk builds towards the weekend.

“We need to get a really good handle on that fire before high fire danger conditions return,” an RFS spokeswoman said.

The Yarrabin fire burning in the Kybeyan Valley was still uncontained after burning through 9400 hectares and firefighters were working to protect rural properties under threat.

Another uncontained fire at Cobblers Road, 10km west of Yass, has slowed and while not threatening properties, it was approaching an electricity transmission line. – AAP