No US hint of extraditing Julian Assange: Carr

The US government has given no hint it wants to extradite WikiLeaks founder Julian Assange over the release of secret diplomatic cables, Foreign Minister Bob Carr says. 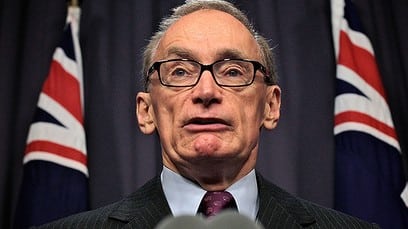 THE US government has given no hint it wants to extradite WikiLeaks founder Julian Assange over the release of secret diplomatic cables, Foreign Minister Bob Carr says.

Senator Carr says two discussions with American officials have not indicated any plan to extradite Mr Assange to the US.

“There is not the remotest evidence that is the case,” he told ABC TV on Sunday.

Mr Assange has been at Ecuador’s embassy in London since 19 June as the South American nation considers his application for political asylum.

Ecuador’s ambassador to the UK, Anna Alban, travelled from London to her nation’s capital at the weekend to brief President Rafael Correa on Mr Assange’s request.

Dr Correa has said his government will consider the claim for political asylum but not when a decision would be made.

“She will also fully brief the president on her recent meeting with officials of the UK government,” it said in a statement on Saturday.

The asylum bid is a late effort by Mr Assange to avoid extradition to Sweden to face sex-crime allegations he says are baseless.

The Australian-born 40-year-old fears removal to Sweden could pave the way for extradition to the US, where he would face possible charges – and a possible death sentence – over the WikiLeaks release of secret diplomatic cables.

Senator Carr said the US could have asked the UK government to extradite Mr Assange over the two years the WikiLeaks founder had been in London.

“There is a view that it would be easier for the US to extradite him from the UK rather than from Sweden, where he is wanted for questioning about (matters) wholly unrelated to anything to do with WikiLeaks or state secrets,” he said.

But Senator Carr said some US authorities had yet to state that they were not interested in extraditing the Australian.

“They haven’t been able to rule out that one corner of the American administration is considering it, but I would expect the US wouldn’t want to touch this,” he said.

Attorney-General Nicola Roxon said Australia had not abandoned Mr Assange but did believe he needed to comply with other countries’ laws.

“There is nothing the Australian government can currently do that it has not been doing,” Ms Roxon told Network Ten.

“He’s not in Australia and he’s not charged with an Australian offence.”

Ms Roxon said Mr Assange being overseas made more difficult the government’s job of ensuring he received a proper and fair process.

“Australia has a lot of control and ability to protect its citizens if they are pursued for a political offence (while here),” she said.

Mr Assange was likely to be arrested once he stepped outside the diplomatic protection of the Ecuadorian embassy as he has breached his bail conditions, Scotland Yard said. – AAP

Have your say on the Assange extradition saga – tell us what you think below: