No new hope for Aussie pair on death row

Jakarta's successful diplomatic efforts to save Indonesians from the death penalty in other countries do not mean the two Bali Nine members on death row can expect a reprieve, the country's foreign minister says. 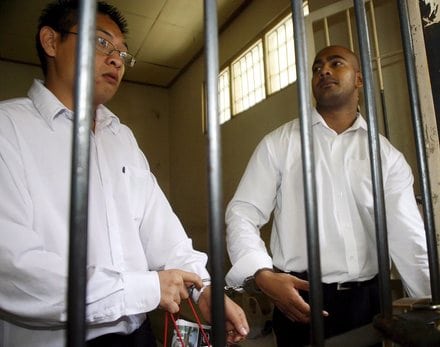 JAKARTA’S successful diplomatic efforts to save Indonesians from the death penalty in other countries do not mean the two Bali Nine members on death row can expect a reprieve, the country’s foreign minister says.

Andrew Chan and Myuran Sukumaran, the so-called ringleaders of a 2005 plot to smuggle more than 8kg of heroin from Bali to Australia, had their final appeals against their death sentences rejected last year.

They must now rely on clemency from Indonesian President Susilo Bambang Yudhoyono if they are to avoid the firing squad and are expected to lodge their applications later this year.

Indonesia was last year successful in saving the lives of 35 of its own citizens facing execution overseas.

“As for Indonesian citizens that have been (given) the death penalty, various diplomatic approaches were carried out at all levels, including by the president,” Indonesian Foreign Minister Marty Natalegawa said on Wednesday.

“Among all Indonesian nationals facing the death penalty, more than 65 per cent were sentenced for drug offences and 31 per cent for homicide, the types of criminal offences that face serious consequences in many countries including Indonesia.”

But in a worrying sign for Chan and Sukumaran, Dr Natalegawa also appeared to downplay suggestions the successful intervention in capital punishment cases involving Indonesians abroad translated into hope for the two Australians.

“The reality is in Indonesia, as in many other countries, capital punishment, death penalty, is still very much part of our legislation, our legal framework,” he said in response to a question regarding the Australians on death row in Bali.

“What we need to be ensuring as far as Australian citizens are concerned, in the same way as our citizens overseas, is that their legal rights are protected, that in the legal process they are given the respect for the presumption of innocence and that the whole process (is carried out) in good standing.”

He rejected, however, the suggestion that efforts to save Indonesians from being put to death while also continuing to apply capital punishment against foreign nationals amounted to a double standard.

The comments come after a spokesman for the Indonesian president said late last year that Dr Yudhoyono remained steadfastly opposed to leniency for people convicted of drug offences.

Prime Minister Julia Gillard raised the issue of clemency for Chan and Sukumaran, as well as the Gold Coast’s Schapelle Corby, when she held talks with Dr Yudhoyono in Bali in November.

Corby has already lodged a clemency appeal against her 20-year sentence for drug trafficking.

Chan and Sukumaran are among 87 people on death row in Indonesia, of whom 50 had been convicted of drug-related offences.

A spokesman for the Indonesian Ministry of Justice and Human Rights Ministry said his department was working with the Supreme Court to carry out the executions.

The long delays in carrying out executions have meant some prisoners in Indonesia have been on death row for more than 40 years.