Labor strategist Bruce Hawker says a Kevin Rudd leadership comeback would only be on the cards if the "national interest" warranted it. 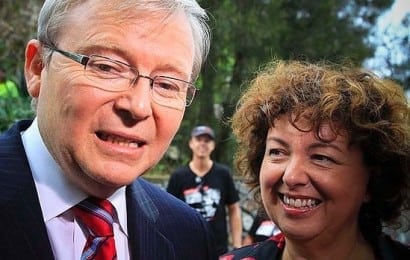 LABOR strategist Bruce Hawker says a Kevin Rudd leadership comeback would only be on the cards if the “national interest” warranted it.

Mr Hawker, a close confidant of the former prime minister, was responding to a Fairfax interview with former first lady Therese Rein published on Saturday.

Ms Rein said if she ever agreed to Mr Rudd returning to the ALP leadership it would be “on the proviso that is was completely about the country, the national good”.

Mr Hawker said on Monday the comments were carefully chosen.

“I think what she was saying .. is it wouldn’t just be about coming back to take over the reins for the sake of doing it,” he told Sky News.

“There would have to be a very compelling argument and that argument would be the national interest.

“That is what drove him when he was prime minister before and that continues to be his focus.”

Mr Hawker said Mr Rudd had made it clear he would not contest another caucus ballot for the leadership.

He also said Ms Rein had her own perspective and was not adopting any “tactic or strategic view” on a leadership return. – AAP