Mutterings in the ranks: LNP abandon Newman’s ‘mandate for change’

Having swept the LNP to power in the last Queensland state election, it seems Campbell Newman is now finding it difficult to keep rank and file in line as he sets about implementing his 'mandate for change'. 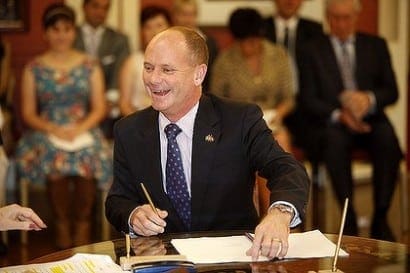 DISCIPLINE. It is one of the most important qualities in any successful organisation. It is particularly essential that firm discipline is exercised in a military unit as, without strong leadership and guidance, it is easy for a team to fall into confusion and disarray. In a war-zone confusion and disarray equates to death, and any leader that does not demand discipline from their troops courts disaster.

It has been almost twenty years since Major Campbell Newman left the Australian Army. In those twenty years he has cultivated a political career defined by strong, proactive leadership. As the Lord Mayor of Brisbane he was the most senior elected Liberal Party figure in the country for a number of years in the aftermath of the 2007 Federal election that saw John Howard removed from power. Having this sort of leadership thrust upon him suited Newman just fine: he was trained to respond to the call of duty.

It was this same willingness to accept responsibility that saw Campbell Newman takes up the reigns of the Queensland Liberal-National Party and lead them into the 2012 state election, without ever having been elected to parliament. In an exceptional moment of Queensland history, Newman was selected as the party’s leader from outside parliament and led the LNP to one of the biggest electoral victories in Australian history. The Queensland Labor Party was virtually annihilated, losing 44 seats and left with only 7 members of parliament, in contrast with the 78 seats held by the newly formed LNP Government. Newman was, once again, ascendant.

‘Can-Do’ Campbell, as he styled himself in his campaign for the Brisbane mayoralty, has always been a civic leader that made the story about him. He is a charismatic figure that inspires loyalty and demands respect. In many ways he has tended to run his political machine as one would expect a military man to: with the expectation of discipline and no tolerance for dissent.

That is what made the recent events in Queensland parliament so easy to predict to anyone paying attention. Newman has enjoyed one of the most overwhelming majorities that any state premier has ever had in Australian history. It is virtually impossible for opposition parties to prevent Premier Newman doing anything that takes his fancy. It also means, however, that it has been more difficult than ever for Newman to maintain the control he covets. The larger an organisation is, the harder it is to ensure that all the pieces work together in harmony.

It started with Ray Hopper. The representative from Condamine jumped from Newman’s LNP to the recently formed Katter’s Australian Party (KAP) after ten years of service as a conservative member of parliament. Hopper was immediately elected leader of the Queensland KAP, who now boast three representatives in the state’s legislature. Hopper was not the last to leave Newman’s platoon, however.

Last month saw the departure of Yeerongpilly member Carl Judge and, more curiously, veteran Gaven member Dr Alex Douglas. Judge jumped from the LNP before he was pushed, after the parliamentary party voted to ask state president Bruce McIver to consider his disendorsement on the grounds of disloyalty after Judge spoke out about the severe cuts to the public service enacted under the Newman Government.

Dr Douglas’s road to defection from Newman’s unit is slightly more complicated. Douglas was one of the few members of parliament on Newman’s team that had served in state parliament prior to the 2012 election. Douglas had served as chairman of the parliament’s ethics committee and the crime and misconduct committee until Hopper’s defection left open the position of chairman of the legal affairs committee. Douglas was first moved into the legal affairs position before being dumped from that role after fellow Gold Coast MP Ray Stevens moved a motion claiming that the committee deserved a chairman that was “totally committed to the job”.

The Newman Government’s coordinated attack against Dr Douglas has, ironically, led to perhaps the most significant challenge thus far to the Premier’s tight grip on the reins of power in the Sunshine State. Shortly after his resignation from the LNP Dr Douglas released a series of television commercials designed to explain his break from the government, funded in large part by mining magnate and Newman nemesis Clive Palmer.

Palmer has had a long-standing enmity for Campbell Newman, finding the Premier obstinately resistant to the billionaire exercising influence over government policy. It is this mutual opposition to the Premier that has made strange bedfellows out of consummate media performer Palmer and the relatively mild-mannered Douglas. Palmer has thrown his support towards plans to create a new opposition party in Queensland under Douglas’s leadership, joining Katter’s Australia Party in a conservative block against the LNP in Parliament.

Coincidentally enough, Dr Douglas has strong family ties with Katter’s Australia Party: he is the cousin of KAP figurehead Rob Katter and nephew of Australian political icon Bob Katter. It seems a streak of rebellious behaviour runs deep in the Katter/Douglas bloodline.

The creation of a new political party would cast Dr Douglas as a revolutionary figure rising up against the militaristic rule of Premier Newman. The question remains as to what kind of revolutionary he will be: will he take the role of Queensland’s Che Guevara, inspiring the state’s citizens to rise up in protest, or perhaps he will serve as a Paul Revere figure sounding the alarm against unlawful tyranny?

Just as long as he does not take the role of Jean Valjean, the French revolutionary portrayed by Hugh Jackman in Les Miserables. For all his talents as a politician, I am not sure Dr Douglas has the vocal range to take on that particular role.