News Corporation boss Rupert Murdoch has hosed down speculation about his leadership of the company he founded more than 50 years ago, saying he has board backing to stay at the helm. 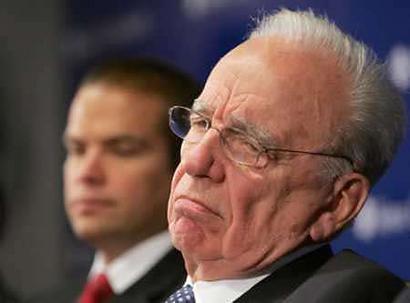 NEWS CORPORATION boss Rupert Murdoch has hosed down speculation about his leadership of the company he founded more than 50 years ago, saying he has board backing to stay at the helm.

The board support for Mr Murdoch to remain as chairman and chief executive comes as the global media giant grapples with the phone hacking scandal that forced the closure of leading UK tabloid News of the World.

The revelations prompted calls from some investors for Mr Murdoch to separate the role of chairman and chief executive, as well as improve the board’s corporate governance procedures.

There have also been grumblings about News Corp’s dual-class share structure where Mr Murdoch, through a family trust, holds roughly 40 per cent of voting stock, despite having an economic interest of about 12 per cent.

“The board and I believe I should continue in my current role as chairman and CEO,” Mr Murdoch said during the company’s full-year earnings presentation on Thursday.

“But make no mistake, Chase Carey and I run this company as a team and the strength of that partnership is reflected in our improved results.”

News Corp’s shares outperformed the flat Australian market on Thursday, closing up 54 cents at $14.75, while the company’s non-voting stock rose 39 cents to $14.25.

“However, I doubt it will stop the ruminations about his longevity at the company,” Mr Fraser said.

“He is over 80 years-old now. This conversation is not a new one.”

The hacking scandal has resulted in 12 arrests, as well as the resignation of two senior News Corp executives.

Mr Murdoch, fronting his first earnings presentation since August 2010, said there had been no material impact on other parts of the media company’s global empire.

On the matter of succession, and whether the board would want son James to lead the company at some stage in the near future, Mr Murdoch said: “I hope the job won’t be open in the near future. Chase is my partner. If I went under a bus, I’m sure he’d get the job.”

“Chase and I have full confidence in James. I think that is all I need to say about it.”

In response to a question, he rejected suggestions the company’s board members were not independent by traditional corporate governance definitions.

“It’s a very strong board, very often very critical, and we have a lot of free-ranging discussions,” Mr Murdoch said.

News Corp said net profit for the 2010/11 came in at $US2.74 billion ($A2.70 billion), up about eight per cent from the previous corresponding period.

The result, broadly in line with market expectations, was led by continued strong earnings growth among News Corp’s subscription and broadcast television properties.

In terms of guidance, the company said it expected operating income, or earnings before interest and tax (EBIT), to grow in the low to mid teens range in the current year, from an adjusted $US4.975 billion in 2010/11.

Morningstar analyst Michael Corty said it was a solid result, which highlighted the growth potential of the cable networks both in the US and overseas.