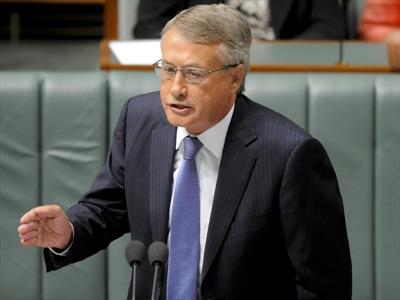 The minerals resource rent tax (MRRT) was forecast to raise $2 billion over the entire 2012/13 financial year.

“It’s clear revenues from resource rent taxes have taken a massive hit from the impact of continued global instability, commodity price volatility and a high dollar,” Treasurer Wayne Swan said in a statement on Friday.

The government had repeatedly argued, based on tax office advice, that releasing the information would be a breach of tax privacy laws.

On Friday, Mr Swan said: “The government has always supported increased transparency in our tax system and we believe any revenue from the MRRT should be published – which is why I am making this information public after it was received earlier today.”

In a note to the treasurer, Mr Jordan said after receiving two quarters of revenue instalments, he had formed the view the disclosure would not breach privacy laws.

He took into account a range of factors, including the fact that the second instalment was substantially larger than the first.

Mr Jordan also considered the total number of MRRT payers, the degree of uncertainty with which such information could be used to deduce what a particular payer had paid as well as advice from the Australian Government Solicitor.

Mr Swan said government revenues across the board were down substantially.

In terms of the MRRT, he noted it was a profits-based tax that raised more revenue when profits were higher and less when they were lower.

Assistant Treasurer David Bradbury is leading the government’s work to broaden transparency in the business tax system, including MRRT revenue, and remove any ambiguity from reporting requirements.

Later at a media conference Mr Swan repeated the MRRT revenues had been impacted by global instability, the volatility of commodity prices and the high Australian dollar.

The extent to which the fall in commodity prices had been responsible was unclear and this issue would be examined by the tax office and Treasury.

“Australians own our resources 100 per cent and when very big profits are made Australians are entitled to share in those profits and that is the purpose of the MRRT,” he told reporters in Brisbane.

But the MRRT, like the petroleum resources rent tax, were “inherently volatile taxes”.

Mr Swan said the opposition had claimed the MRRT had raised no revenue.

Asked if the government would reach its $2 billion MRRT revenue forecast for the year, Mr Swan said there had been a partial recovery in commodity prices.

“We will have to see what happens in the next six months,” he said. –AAP