The Australian High Commissioner to Britain, Mike Rann, has used his first speech to the Australian business community in the UK to reiterate support for a strong partnership across business, government and communities between Australia and the UK. 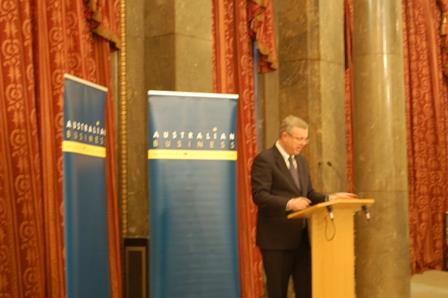 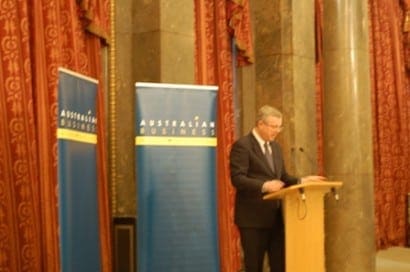 AUSTRALIA’S newly appointed High Commissioner to Britain Mike Rann has used a business lunch at Australia House to outline his vision for the future of Australian and British relations.

The speech identified an approach in which both Australia’s growing links with a prosperous Asia and our traditional ties with the UK could be accommodated to the mutual benefit of both Britain and Australia.

Hosted by Australian Business, Mike Rann delivered his speech to an audience of approximately 150 attendees made up of prominent members of the UK Australian business community, including John Burton, Director of Development at Westfield, Agent-General for Queensland Ken Smith, Agent-General for WA Kevin Skipworth and the Hon. Ros Kelly AO and Hon. Shelia McHale.

Mr Rann, who succeeded John Dauth in the post of High Commissioner to the United Kingdom on 3 December 2012, told the audience Australia could embrace both Asia and the UK.

“The two are not mutually exclusive,” he said.

Whilst acknowledging our traditional ties with Britain and Europe, Mr Rann also recognised the shift of policy focus in Australia towards those nations in closer geographical proximity. This shift was recently articulated in the Government’s ‘Asian Century’ white paper.

He said Asia’s re-emergence as the world’s most dynamic economic region necessitated Australian engagement in this area.

“Our current and future prosperity is directly linked to the Asian growth story,” Mr Rann said.

However, Mr Rann reassured attendees this shift did not mean turning away from Britain and Europe.

“Our engagement with our Asian neighbours and with emerging markets in Asia will not distract us from our traditional allies and developed markets.”

Instead, the focus for Australian businesses in the UK should be on facilitating UK access to Asian markets, as Australia has unique advantages to offer in our understanding of business in Asia.

“What was once referred to as the tyranny of distance – Australia’s geographic remoteness from Europe and North America – has become the advantage of adjacency — with the world’s fastest growing economies on our doorstep,” said Mr Rann.

Mr Rann said the UK and Australia had a “virtually unparalleled relationship”, sharing aligned interests and perspectives as well as strong bonds of history, family and values.

Mr Rann paid tribute to his own British heritage, noting like PM Gillard and Opposition Leader Tony Abbott, he was born in the UK before emigrating to New Zealand and then to Australia.

“Fifty years to the day of my departure from British soil I returned as the Australian High Commissioner.”