Treasurer Wayne Swan says the fallout from economic "storm clouds" in Europe, Asia and the United States has made returning the budget to surplus much harder. 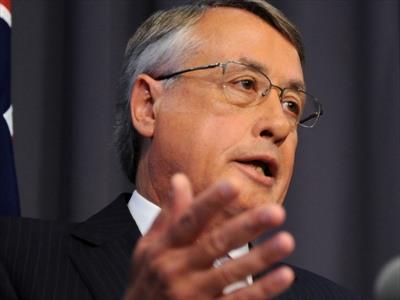 TREASURER Wayne Swan says the fallout from economic “storm clouds” in Europe, Asia and the United States has made returning the budget to surplus much harder.

“It’s pretty obvious to all that .. this mid-year review has been put together amid storm clouds which are hanging over the global economy,” he told reporters in Canberra on Monday.

“This lower global growth outlook has had another very big whack at government tax revenues and has made it harder to deliver a surplus.”

Mr Swan said anyone who suggested Australia is immune from the global fallout is “kidding themselves”.

But Mr Swan defended plans to reduce the baby bonus from $5000 to $3000 for second or subsequent children.

“We believe these changes to the baby bonus will bring it into line with the actual cost of having children,” he said.

He noted that after the first child, most families had cots and prams that could be reused.

But the government was able to find $16.4 billion of savings over the budget forward estimates, as reflected in the budget update released on Monday.

“Our savings send a very clear message to the world that we have world-beating public finances,” Mr Swan said.

“That is very important given global economic uncertainty.

“We have been running a very tight ship.”

The savings had been made with lower- and middle-income Australians in mind and would give the Reserve Bank of Australia room to cut interest rates in the future.

“We have been living up to our end of the bargain,” Mr Swan said.

Mr Swan repeated the government will return a surplus of $1.1 billion in 2012/13 and that future surplus will grow.

Mr Swan said Australia’s public finances were among the strongest in the developed world, with net debt dramatically lower than other advanced economies.

“With Australia’s strong set of economic fundamentals, it is hard to find a country that is better placed to deal with uncertain times in the global economy,” he said.

The treasurer said there were challenges ahead, and no economy could hide from global weaknesses.

“But I don’t think we should let these challenges overshadow the substantial strengths we find in our economy, which is a standout in the eyes of the world,” he said.

“You wouldn’t want to be anywhere else in the world.”

Finance Minister Penny Wong said some of the savings in the budget update would “no doubt be unpopular”.

“But the government is focused on making the right decisions for our circumstances and ensuring a strong and sustainable budget position now and into the future,” she said.

Mr Swan defended changes to the company tax payment timetable, saying there would be time to absorb the impact because they won’t start to take effect until January 2014.

The decision to move company tax payments to a monthly basis, from quarterly, would make the system “more accurate, more timely and more clear”.

“It’s not an increase in tax, it’s simply a change in the timing of it,” Mr Swan said.

He also rejected opposition claims the mid-year economic and fiscal outlook had been brought forward to Monday to avoid scrutiny of the effectiveness of the government’s minerals tax.

Mr Swan said the first mining company payments would be coming into the tax office on Monday, but this did not mean the government had a complete appreciation of what the revenues were going to be.

But he did say the government had written down minerals resource rent tax revenue by more than $4 billion this year, and by $9 billion over the forward estimates.

“There would not have been any more substantial information to have governed our estimates about resource rent taxes next week or the week after,” he said.

Mr Swan, who revealed the updated budget surplus figure on Twitter, said he had done so to “get it out to everyone at once”.

“Our regard for it doesn’t change because it was out on Twitter,” the treasurer said.

Asked whether he could guarantee the $1.1 billion figure would not be revised down again, Mr Swan said he took the forecast “really, really seriously”.

“It’s the forecast of the government prepared for it by the Treasury,” he said.

“Our Treasury, when it comes to these matters, is regarded as one of the best in the world.” – AAP