A man has been accused of starting a 10,000 hectare bushfire in southern Tasmania, as the state's northwest corner faced its own fire crisis. 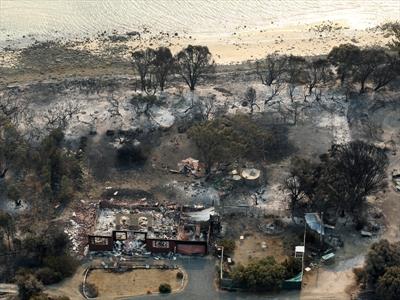 A MAN has been accused of starting a 10,000 hectare bushfire in southern Tasmania, as the state’s northwest corner faced its own fire crisis.

The fire remained out of control on Monday night, despite the best efforts of 28 Tasmanian Fire Service vehicles.

Police said they would proceed with a charge of leaving an unextinguished fire unattended.

In declaring a total fire ban for Tuesday, State Fire Controller Gavin Freeman said Tasmanians needed to be extra cautious with all fires.

“Members of the public need to make sure any fires lit on their properties over the last week are completely extinguished,” he said.

“This means making sure fires that have been extinguished are cool to touch.”

Police believe the Forcett blaze that tore through the Tasman Peninsula on Friday started with a smouldering tree stump which was thought to have been extinguished.

On Monday, teams of police, Tasmanian and interstate fire services, SES and army reserves were picking their way through the ruins of houses in the area south of the worst hit town, Dunalley.

About 250 properties have already been searched in and around Dunalley, including 90 badly damaged or destroyed buildings, but no bodies have been located.

Police are reluctant to put an exact figure on the number still missing but Acting Commissioner Scott Tilyard suggested there had been little change from the 100 who were unaccounted for on Sunday.

“About 500 inquiries still need to be confirmed that people have definitely been accounted for,” Mr Tilyard told reporters on Monday.

“There’s a significantly lower number of people that we do have more serious concerns about.

“Yesterday it was around about 100 people.”

Teams were working in Dunalley, while 65 searchers were heading to the more densely-forested areas of Murdunna and Sommers Bay.

The ongoing search continues as authorities issued an emergency warning for a fire burning near Mawbanna, west of Burnie in the state’s northwest.

Nearby residents were being told it was too late to leave as warm weather continued to hamper firefighting efforts.

Four secondary level warnings were also in place across the state, including the Forcett blaze that razed Dunalley and a fire near Bicheno on the east coast which has destroyed up to 15 buildings.

Police say the largest fire is likely to have started when a tree stump was not completely extinguished before bans were imposed.

“It now appears that there might have been a root system underground that was still burning that’s worked its way to the surface and ignited the fire,” Mr Tilyard said.

The Tasman Peninsula remained cut off on Monday but police had begun escorted convoys to deliver badly-needed supplies and were assessing whether to let the hundreds still stranded leave.

The Nubeena community was still looking after 500 people and Port Arthur around 250.

Prime Minister Julia Gillard got through, touring Dunalley after her motorcade was taken into the area under police escort.

“There’s really no way of fully appreciating it apart from seeing it yourself,” Ms Gillard said.

“(But) the fact that we can stand here shouldn’t fool people into thinking that there’s no continuing firefighting going on.”

Ms Gillard defended her itinerary with many residents from Dunalley still unable to return because of safety concerns.

“I understand the frustration of people who want to get back to see what’s happened to their home,” Ms Gillard said.

“The thing that would be worse … would be to try to go and see it and get hurt doing so.”

The Insurance Council of Australia said at least $26 million in damage had been done to homes, businesses, vehicles and holiday shacks, but expected the figure to rise sharply.

Energy supplier Aurora said about 3000 homes on the peninsula were without power and some could expect to remain so for several weeks. – AAP