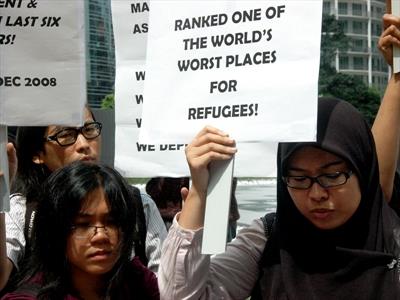 IN an affidavit filed but not yet read in the High Court, Mr Bowen said he took into account a range of advice from Malaysian officials, his department and the United Nations refugee agency UNHCR before deciding to send asylum seekers to Malaysia.

The full bench of the High Court will next Monday hear a legal challenge brought by refugee lawyers against the federal government’s proposal to send asylum seekers to Malaysia in exchange for processed refugees.

In his affidavit, Mr Bowen said after eight months of discussions with Malaysian officials he formed a view the country had made a “significant conceptual shift” about its treatment of asylum seekers.

He said Malaysia had begun to improve the protections offered to refugees and asylum seekers and was also considering granting asylum seekers work rights.

“The understanding that I formed from my conversations with the Minister of Home Affairs and other Malaysian officials was that the Malaysian government was keen to improve its treatment of refugees and asylum seekers,” he said in the affidavit.

Mr Bowen also said he had met with United Nations High Commissioner for Refugees officials and understood the refugee agency considered the arrangement had benefits and would be workable.

He had taken advice from his department which “reassured me that Malaysia did provide basic support and protection to asylum seekers,” the affidavit said.

“At the heart of it is the process by which the minister … declared under Australian law that Malaysia is a place that is suitable to send asylum seekers to because it has adequate procedures, protections and human rights standards in place,” Mr Manne told reporters outside the High Court in Melbourne, following a directions hearing for the matter.

“That is a matter of considerable controversy in the case, it is one of the key questions in this case,” he said.

Mr Manne said it remained to be seen whether the new evidence in the affidavit was consistent with previous commonwealth evidence provided in the case.

It also emerged in Monday’s hearing that the Australian Human Rights Commission will intervene in the case on behalf of a 16-year-old unaccompanied boy facing deportation to Malaysia.

The government’s controversial people-swap deal was put on hold last week after refugee lawyers convinced the High Court to order an injunction against the first deportations of 16 asylum seekers.

The full bench of the High Court will hear the case next week before making a ruling as to whether the government’s proposal is lawful.

Under the Gillard government’s people swap deal, Australia will send 800 asylum seekers to Malaysia in exchange for 4000 processed refugees.