The race that stops a nation in Australia has stumped the UK media, with coverage they claim demonstrates that Australia’s grandest event is “going to the dogs”. 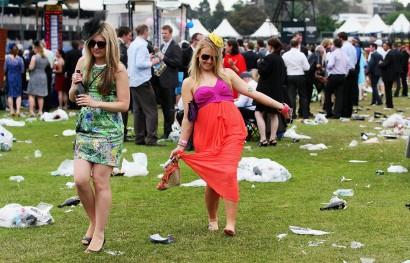 THE race that stops a nation in Australia has stumped the UK media, with coverage they claim demonstrates that Australia’s grandest event is “going to the dogs”.

In a day where a 106,000 strong crowd were fitted out in their finery and barracked with enthusiasm for a strong field of 24 horses, there was no shortage of photo opportunities. Fashions on the field, celebrity sightings, thundering thoroughbreds piquing each other at the post – a multitudinous number of options to focus on.

So, in the plethora of snaps available to be taken up by the UK media, what is it that has managed to become the defining images of our day of frivolous fun?

No, it wasn’t the photos of suited gentlemen and frocked ladies delicately huddling under designer umbrellas away from the gloomy skies, and it wasn’t Mischa Barton smiling wanly at the cameras in the Birdcage. It wasn’t Green Moon sweeping his trainer to a 4th Melbourne Cup victory. It wasn’t even Charles and his Duchess sweetly sharing a giggle at the presenting of the prize.

The photos that have instead drawn the attention and ire of a tabloid not known for its own high standards of taste and decency, are a series of shots focusing on the event’s extremes of excess.

Gleefully reporting in their top story that “men and women were flaked out on the grass after a boozy day [and] girls drank straight from champagne bottles”, the newspaper feigned outrage that the Royals should be subjected to such uncouthness, such vulgarity, from their vantage point on the balcony.

“One [racegoer] even staged an impromptu pole dance” the Daily Mail huffed, “while the detritus from the day built up shamefully around them”. The “hedonistic” crowds “sank gallons of booze and caused havoc around the racecourse” it continued.

Bloodbath at universities: Campuses to close and job cuts loom

Amongst the 611 comments that followed the report, Australia as a whole fared not much better, the indulgences of a few apparently representing the carnage of a country.

“It has already been said the riff raff were shipped off to the colonies years ago, so what do you expect” claims one reader. “What else would expect from Aussie’s, loud, obnoxious with no class or dress sense,” says another.

Aussie’s responded quickly in kind, with two schools of thought. Either, it looks like fun and “you’re just jealous”, or, well, check out the streets of some areas of England on a Saturday night and then get back to me.

Perhaps a more appropriate question was asked by a reader looking for a different type of news: “THIS as the main headline while an important election goes on. Our national ‘newspapers’ are a laughing stock around the world and rightly so.’

Well, whether it’s the newspaper itself, or at the expense of the unfortunate victims of these happy snaps, at least someone out there is having a laugh.

What do you think? 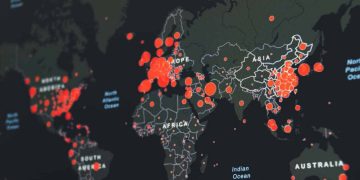 Australia has avoided the worst of the pandemic