Around 200 generous revellers gathered in Australia House’s ballroom on Friday 19 April to fundraise for Legacy London. 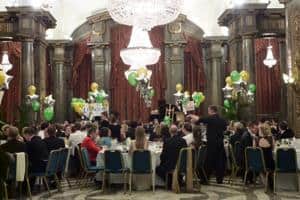 AROUND 200 generous revellers gathered in Australia House’s ballroom on Friday 19 April to fundraise for Legacy London.

Legacy London, which helps families living in the UK of Australian and New Zealand veterans, organises its Anzac Ball every year.

“This was our biggest and most successful Anzac Ball ever,” said Simon Kleinig, Deputy-President of London Legacy.

“It was great fun, and we managed to raise a lot of money for Australian war widows living in the UK.”

Australia’s political and military heavyweights in the UK all turned out, including the newly-arrived High Commissioner, former South Australian Premier Mike Rann.

Dining under floating green and gold balloons and well-imbibed with Australian wines, beers and Rutherglen muscat, guests were more than ready to dig deep for the fundraising auction.

With all money raised going to support Legacy’s families in the UK, guests scored hotel weekends away, signed Olympic memorabilia, boxer shorts of the American boxer Mike Tyson and — in the surprise of the evening — one very expensive stuffed toy puppy.