Many of the nearly 500 Aussies in the city's Ambulance Service will spend Australia Day on shifts 10,000 miles away from home, looking after Londoners.

by Alan Aldridge
in News

The UK’s biggest ambulance service is marking Australia’s national holiday today, 26 January, by thanking the Australians working in its team, who make up around 10 per cent of the workforce.

Many of the nearly 500 Aussies in the Service will spend the day on shifts 10,000 miles away from their country of origin, looking after Londoners.

The Service began a recruitment push in 2014 to hire medics from Down Under to address a national shortage of trained paramedics in the UK, with 570 Australian paramedics joining in four years. Among frontline staff, 11.5 per cent are from Australia.

Drew Pemberton, 24, joined the Service three years ago, and met his English girlfriend after coming over.

“You get a lot of experience very quickly in London. There are more career opportunities and variety of incidents than at home. There are also more specialist roles and new challenges,” he said..

“It’s good to be working with a lot of Aussies – there’s a good support network for us when we’re so far from home. I feel like I have a London family and my Australian family.

“On Australia Day, I’m working but I’m planning on having a sausage sizzle after work.” 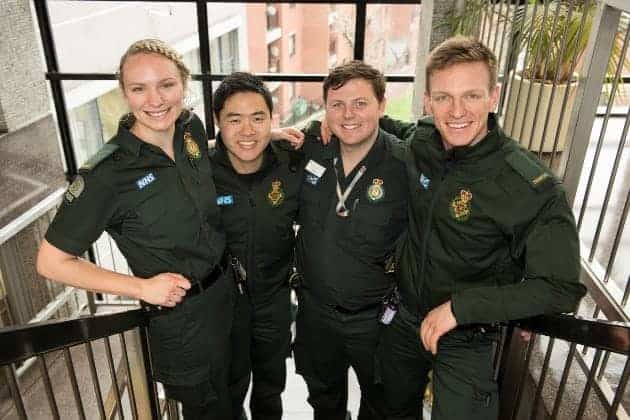 Paramedics in Australia are trained to a similar high standard to those in the UK, meaning they’ve enjoyed a smooth transition upon joining the team.

“I had been working as a paramedic for around five years in New South Wales before getting a job with the London Ambulance Service,” he said.

“I think the main reason for me coming here was the chance to travel. I enjoy being able to explore Europe and it’s been a great experience living and working in another country. I do miss the weather back home!”

An additional 104 paramedics from Australia are due to join the Service between January and March 2018, with more than 165 others expected to follow and become part of the team from April onwards. These new recruits will be joined by 250 British graduate medics.

Paul Woodrow, the Service’s Director of Operations, said, “We’ve been thrilled to welcome so many Australians. They’ve been a real asset to the Service and to the people of London.”

“We’re delighted to now be hiring more medics from the UK, but the continuing commitment of our Australian medics is invaluable. It’s great to be recognising their efforts on Australia Day.”