Billionaire mining magnate Clive Palmer's latest lambasting of the Newman government has exposed the widening gap between it and the Liberal National Party (LNP) executive, after comments that the Treasurer and Deputy Premier were crooks. 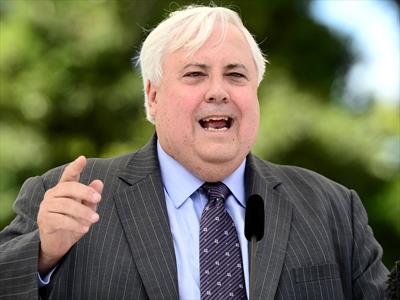 BILLIONAIRE miner and major Liberal National Party (LNP) donor Clive Palmer says he’s not surprised at a decision to suspend him from the party but its timing is “a little bit stupid”.

“When you make a stand against corruption, immorality and debauchery you have to expect that people will be out to get you,” Mr Palmer, who was a life member of the party, told AAP on Friday.

“It’s a little bit stupid to lodge a complaint with the party at two o’clock and be suspended at 5.30,” he said with a laugh.

Mr Palmer lodged a complaint with the LNP executive on Friday, seeking disciplinary action against Treasurer Tim Nicholls, who he accused of lying about the state’s finances while sacking thousands of public servants and paving the way for asset sales.

He called Deputy Premier and State Development Minister Jeff Seeney a “thug” and “lucerne farmer” who has waged a campaign of intimidation against him over a coal project.

Both should be sacked, he said.

“The books have been cooked by the biggest crooks that have ever occupied office in the state of Queensland,” Mr Palmer had told reporters earlier on Friday.

He said his complaint was co-signed by five other party members, including the wife of LNP MP Alex Douglas, who chairs parliament’s ethics committee.

Mr Palmer said Queensland’s real net debt was $11 billion and nothing like the $65 billion flagged by the government.

Another LNP party member had already gone to the executive with a “grave” complaint about Mr Seeney that went to the heart of the deputy premier’s membership of the party, he said.

“The LNP does not in any way concur with or endorse the remarks made by Clive Palmer in relation to the treasurer and deputy premier,” the statement said.

Mr Seeney later released a 12-word response to the LNP’s decision, saying only that “Clive Palmer’s suspension from the LNP is a matter for the party”.

Mr Nicholls said Mr Palmer had been wrong about the state’s debt and that the government’s figures would stand up to scrutiny.

At the end of 2011/12, Queensland was $62.6 billion in gross debt, with $32.6 billion held by government-owned corporations and $30 billion in the general government sector, he said.

“Unless the entire treasury has got its numbers wrong, unless they are applying a standard that is not acceptable to the Australian accounting standards board, then I’m pretty sure that our figures are right,” Mr Nicholls said.

Mr Palmer, who earlier in the day had said the prospect of being suspended was an “absurd proposition”, said he now feared his complaint would also be “put in suspension”.

“This is of great concern for all the people of Queensland,” he said, adding that “what happens to me is not important but the issues I’ve raised are”.