Liz Hurley turns off the English charm at Perth airport 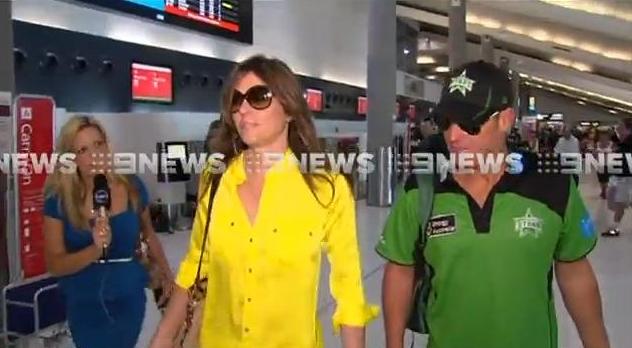 ENGLISH actress Elizabeth Hurley has been accused of pushing and verbally insulting a Channel 10 journalist at Perth Airport earlier today, with the incident caught on camera by journalists interviewing the film star’s fiancé Shane Warne in the aftermath of the Melbourne Star’s defeat by the Perth Scorchers at the WACA the night before.

Journalist Caty Price told 6PR Radio shortly after the incident that she had been a part of the media contingent at the airport to interview cricket legend Warne when she was shoved by Hurley, who went on to tell Price that it was “rude to stand in front of people”.

Price said: “I then asked her, ‘Liz what did you think of the game last night?’ and she spun around on her heels and said ‘I think you should…’ mouthed to me close up to my face ‘F off.’ And then (she) done another spin and flick of the hair and strutted off with Shane.”

Hurley, known for her roles in films such as Austin Powers and Bedazzled, starting dating Warne in late 2010 and the couple became engaged a year later when her divorce from previous husband Arun Nayar was officially finalised. She has been in Australia over the past few months following Warne’s team the Melbourne Stars around the country as they compete in the T20 Big Bash League.

The film star’s behaviour has drawn criticism from sports journalists covering the Big Bash League, with reports of the star’s entourage physically forcing their way through crowds and Hurley regularly flouting strict anti-smoking legislation at cricket grounds around the country.

Price said: “We didn’t approach her at all at the airport and normally I wouldn’t have asked her anything except she sort of pushed us out of the way initially. I thought… may as well throw a question at her. That wasn’t what I was excepting this morning and probably not what I would have thought from an English lady.”

Hurley has yet to comment on the incident, however she took to Twitter to praise her time in the West Australian capital. She wrote: “Goodbye to Perth! Thanku for amazing hospitality… v disappointing result for the Stars but great to spend time in another Aus city. Lots of thanks to the WACA for being so nice. We were looked after beautifully.”

Channel 9 captured this video of the incident: