Labor will back Rudd before election, says Turnbull

Former leader of the opposition Malcolm Turnbull has suggested the Labor Party will turn back to Kevin Rudd before the September federal election. 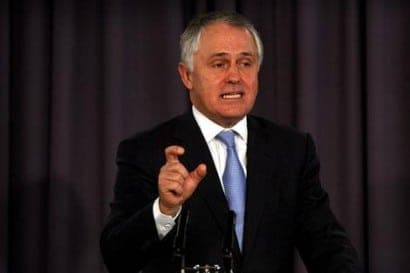 FORMER leader of the opposition Malcolm Turnbull has suggested the Labor Party will turn back to Kevin Rudd before the September federal election.

Mr Turnbull told the ABC he thought it was likely Australia would see Labor switch leaders after their recent slump in the polls.

“I think it is likely they will put him back,” Mr Turnbull said.

”The Gillard government goes from one catastrophe to another.”

Mr Rudd strongly denied the claims and said Mr Turnball should ‘jump in an ice bath’.

”I said a week or so ago everyone should take a long cold shower,” Mr Rudd told Channel Seven on Friday morning.

”What I’d say to Malcolm and you Joe (Hockey) is it’s time to jump in the ice bath.”

There has been continued speculation surrounding the leadership of Labor and whether Mr Rudd would make a challenge.

Recent poll results have seen a 12-point lead go to the Coalition, in a two-party preffered vote.

Despite the Coalition lead, polls suggest people would prefer Mr Turnbull as leader to Tony Abbott. Mr Turnbull has denied he has any designs on becoming Liberal leader.

Polls have also show a strong backing for Mr Rudd as leader of Labor in place of Prime Minister Julia Gillard.

Ms Gillard fended off a challenge for the Labor leadership from Mr Rudd last year, with a strong majority from the party backing her.

Speculation on a possible leadership challenge is not the only problems the Government is facing, with Mr Turnbull also taking the opportunity to criticise the Mining Tax.

“The fate of the mining tax is colossal,” he said.

The mining tax has only earned $126 million, well short of the estimated target of $2 billion.

Federal Treasure Wayne Swan has had further problems with the budget, reportedly it is $2.4 billion down on what it is suspected to have been, according to new figures released.