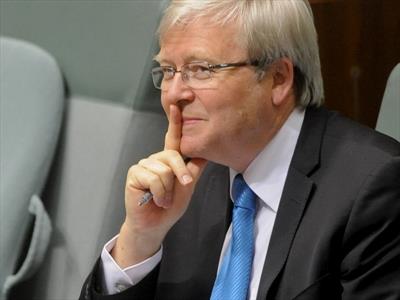 SENIOR Labor figures are talking down the prospect of a leadership change, despite a key Kevin Rudd supporter saying caucus members are concerned about the federal government’s re-election hopes.

Parliament will rise on Thursday for a seven-week break before the 14 May federal budget.

Leadership speculation has been ripe this week, after reports – later denied – that Foreign Minister Bob Carr and Mental Health Minister Mark Butler had switched allegiance away from Ms Gillard.

Chief government whip Joel Fitzgibbon, a key Rudd backer, told reporters in Canberra on Wednesday it was “stating the obvious” that there were concerns in the caucus about the prospect of an election “wipeout” in September.

But he also said numbers were not being counted and no caucus meeting was being planned.

“Anyone who is talking to the media about numbers is just misleading,” he said.

“No one knows what the numbers are because no number counting has been done.”

He also said, “MPs are talking to one another about the state of our position in the polls and an election looming and what we are going to do to make ourselves more competitive.”

Mr Fitzgibbon said Ms Gillard would have his support for as long as she held the support of the majority of the caucus.

He repeated his earlier statement that if leaders stayed unpopular for long enough “they won’t lead the party”.

In a separate interview with Fairfax Media, Mr Fitzgibbon said any suggestion of a leadership ballot between budget day and the September election was a “silly concept”.

Mr Rudd – who heads overseas next week on a trip taking in Korea, China and North America – issued a brief statement on Wednesday, standing by his commitment not to challenge.

“Unlike others who have used the phrase, when I say will not challenge for the leadership, I mean it. That means Wednesday, Thursday, Friday or beyond,” he said.

Deputy Prime Minister Wayne Swan said Ms Gillard was “as tough as they make them”.

“She’s going to beat Tony Abbott because she’s focused on the big reforms for the future,” he said.

Labor MPs were keeping their heads down on Wednesday evening, with all caucus members including the prime minister declining an invitation from ABC’s 7.30 program to be interviewed.

Opposition Leader Tony Abbott, asked whether he was getting nervous about Mr Rudd’s possible return, told reporters in Canberra, “What Australians want is strong and stable government.”.

“They were gathering three years ago on Kevin Rudd and now they are gathering again on the current prime minister,” he said. – AAP