Labor could turn a landslide election defeat into a winning position by bringing Kevin Rudd back as prime minister, according to a poll showing support for Julia Gillard at a record low. 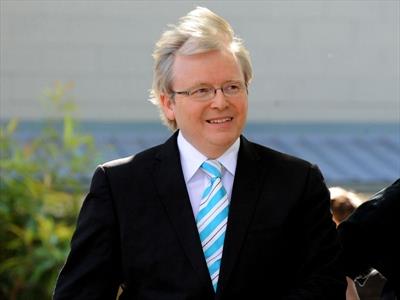 THE latest Fairfax/Nielsen poll shows Labor still trailing the coalition 42 to 58 per cent on a two-party preferred basis, unchanged from last month.

But that would change to 52 to 48 per cent in Labor’s favour if Kevin Rudd replaced Julia Gillard as leader, according to the poll published in Fairfax newspapers on Monday.

Just over a year after she rolled him as leader, Mr Rudd is preferred as Labor leader by 44 per cent of voters compared to Ms Gillard’s 19 per cent.

Labor’s primary vote was at 27 per cent, down one percentage point on last month, but the poll showed it would be 42 per cent under Mr Rudd.

The coalition’s primary vote was steady on 48 per cent.

Ms Gillard’s approval rating fell by six percentage points to 32 per cent, which Fairfax said was the lowest for a prime minister since Paul Keating rated 32 in August 1994.

Opposition Leader Tony Abbott’s approval rating was unchanged at 43 per cent and his rating as preferred prime minister stood at 48 per cent compared to Ms Gillard’s 40 per cent.

Ms Gillard will lead a cabinet meeting in Canberra on Monday to discuss the options for offshore processing after the High Court ruled Labor’s Malaysia solution was unlawful.

Ms Gillard will then have to take the solution, likely to be changes to the Migration Act, to the Labor caucus where offshore processing is opposed by the party’s left faction.

The Fairfax/Nielsen poll showed 25 per cent of voters believed asylum seekers should be processed offshore, with 54 per cent saying they should be allowed to land in Australia to be assessed.

On Sunday Defence Minister Stephen Smith said Labor had no interest in changing leaders despite the government’s recent poor standing in the opinion polls.

Speculation of a change in the federal Labor leadership has increased in recent weeks as polls have had the party’s primary vote under 30 per cent.