EXCLUSIVE INTERVIEW | Pastor Danny Nalliah, founder of Catch the Fire Christian ministry, has launched a new political party, Rise Up Australia, which hopes to field 64 candidates in the 2013 federal election. He talks to PAUL BLEAKLEY about why he feels the time is ripe for a challenge to the concept of multiculturalism in Australian society. 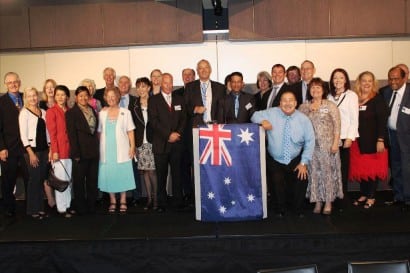 Nalliah, founder of the Catch the Fire Christian ministry, officially launched Rise Up Australia at the National Press Club this week in a speech that outlined the party’s political agenda. Rise Up Australia’s slogan says it all: “Keep Australia Australian”. The party aims to protect Australian society from the pervasive influence of other cultures, which Nalliah blames on a politically correct interpretation of multiculturalism.

Rise Up Australia will be running 64 candidates in the 2013 federal election, with Nalliah himself standing for election as one of the party’s 12 candidates for the Senate. He told Australian Times that Rise Up Australia hoped to gain at least three seats in the federal upper house in order to take the balance of power in government away from the Australian Greens Party.

Nalliah said: “From what we have been hearing, most people are fed up with the Greens. Our first priority would be to replace the term ‘multicultural’ with ‘multiethnic’, meaning you can have people from many ethnic backgrounds but they are all Australian. Only in the West is multiculturalism even spoken about, you rarely hear about it anywhere else.”

The political movement that would become Rise Up Australia was founded after Nalliah was sued by the Islamic Council of Victoria under the state’s Racial and Religious Tolerance Act in 2002. The law- which Nalliah refers to as “subjective rather than objective”- required the pastor to prove his innocence at a substantial personal cost: Nalliah paid $600 000 defending himself while his law firm racked up another $1.2 million in pro bono fees.

Nalliah told Australian Times that this court case was the first step in the foundation of a political movement, with his fight against Victoria’s anti-discrimination legislation rallying support throughout Australia as an attempt to protect free expression. He says that the case “put me on a footing that I didn’t intend to be in” and made him “a household name as a man defending freedom of speech.”

Nalliah said: “I’ve travelled all around the country speaking to people, living in farmer’s homes, and I ask people ‘What do you think of the government?’ … I don’t want to repeat what they say but it is not good. They want the cry of the people to be heard… they are the silent majority.

“They think it is sad to have an unelected government that the people did not elect. People are disillusioned with both sides of politics, the Liberal-National coalition and the Labor-Greens coalition. Now we have come into politics the feedback has been amazing and people are saying that finally there is someone that speaks from our hearts.”

Nalliah believes that Australia’s Muslim population pose one of the greatest challenges to the country’s culture, claiming that the Islamic community are often the driving force in supporting multiculturalism in order to impose their own social values and legal standards within Western societies.

Nalliah is committed to seeing Rise Up Australia become a force to be reckoned with in national politics: he says that as he has travelled across Australia spreading the party’s message they have developed a database of 12 500 supporters. Nalliah told Australian Times that he was prepared to dedicate the next twenty years of his life to Rise Up Australia in order to ensure that Australians were allowed to have their voice heard.

Nalliah said: “I remember I read a speech by John F. Kennedy where he said ‘Ask not what your country can do for you, ask what you can do for your country’. I asked myself how and what I can do for my adopted country of Australia. The whole country is losing rights at the cost of tolerance. There is only so much you can tolerate.”

Rise Up Australia will officially launch its campaign in Victoria on 16 February. The party itself was launched in Canberra earlier this week, where Nalliah was  joined by guest speaker Lord Christopher Monckton.