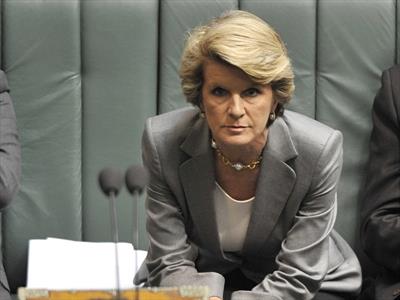 Deputy Opposition Leader  says questions raised about her conduct as a lawyer are a transparent attempt by Labor to deflect attention away from Prime Minister Julia Gillard’s role in establishing a union slush fund 17 years ago.

Labor frontbencher Brendan O’Connor said on Sunday Ms Bishop should answer questions about her conduct as a lawyer in the 1980s when she defended CSR.

Ms Bishop was involved in proceedings in the 1980s concerning compensation for asbestosis sufferers resulting from their work at CSR’s Wittenoom mine in Western Australia.

“Clearly, there’s been some matters arising out of her role as a lawyer at CSR where she used, allegedly, procedural tactics to deny victims of asbestosis their day in court,” Mr O’Connor told ABC television on Sunday.

“She wants to go around spending her entire time not involving herself in foreign affairs as she’s supposed to as shadow minister, but instead seek to smear the government and the prime minister with unsubstantiated allegations.

Despite 432 Indigenous deaths in custody since 1991, no one has ever been convicted. Racist silence and complicity are to blame

How a tightening of wallets pushed Australia into recession

“I think there’s some questions she should be answering.”

Ms Bishop said she was perfectly happy to answer any questions about her professional and ethical conduct during her time as a lawyer.

“So far Brendan O’Connor made some vague allegations today, but I’m happy to answer any specific allegations about any case I’ve been involved in a 20-year legal career,” she told AAP.

Ms Bishop has led the coalition attack against the prime minister over her role establishing what Ms Gillard described as a “slush fund” for the Australian Workers Union (AWU), which was allegedly used to defraud the union.

Ms Gillard has repeatedly denied any wrongdoing and held a lengthy press conference in August to address the issue.

The prime minister has refused to be drawn on new allegations that surfaced last week about a $5000 deposit made into her account at the direction of her former boyfriend and union official Bruce Wilson.

Ms Bishop said the questions raised by Labor would not deter her from pursuing further answers from Ms Gillard on the issue.

“I’ll continue to ask legitimate questions of the prime minister, not only about her professional and ethical standards, but also her honesty in answering questions of recent times at press conferences about the AWU scandal,” she said.

Labor was trying to deflect attention away from questions of Ms Gillard in relation to the AWU, Ms Bishop said.

Do you know about David Dungay Jr

A go-slow on spending sent the economy backwards

Poor March quarter figures and expected larger contraction in June pushes the economy into recession for first time in nearly...

Police officer under internal investigation for his actions during protests in the US. In London, an Aussie TV journo is...