Controversial WikiLeaks founder Julian Assange could know within hours whether Ecuador will give him political asylum. 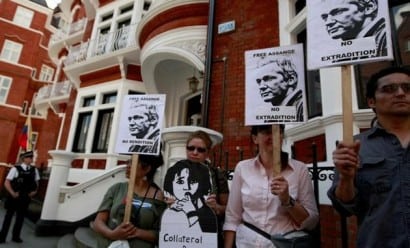 CONTROVERSIAL Wikileaks founder Julian Assange could know within hours whether Ecuador will give him political asylum.

Mr Assange has spent a second night in Ecuador’s embassy in London as the South American country mulls his political asylum application.

The bold asylum bid is a last-ditch effort to avoid extradition to Sweden to face sex-crime allegations he says are baseless.

The Australian-born 40-year-old fears removal to Sweden could pave the way for extradition to the US to face charges – and a possible death sentence – over Wikileaks’ release of secret diplomatic cables.

Ecuador’s deputy foreign minister told ABC Radio on Thursday that the country’s president would make a decision within 24 hours.

But reports later quoted President Rafael Correa as saying his government would take its time with a decision “because this is a very serious matter”.

Mr Correa has previously expressed support for Mr Assange and Wikileaks, and says his asylum application letter impressed him.

But even if Ecuador does grant Mr Assange asylum it is far from certain that British authorities would allow passage out of the country.

British police have been waiting outside the embassy, poised to arrest him for violating the terms of his bail if he tries to leave.

Foreign Minister Bob Carr was dismissive on Thursday of Mr Assange’s concerns about extradition to the US.

“If the US were pursuing extradition of Julian Assange they could do it just as easily – according to some experts more easily – from the United Kingdom … than from Sweden,” he told ABC Radio.

Attorney-General Nicola Roxon says she has made representations to senior US officials in Canberra and Washington about any pending indictment against Mr Assange.

“We have no evidence such action is about to be taken,” she told Sky News.

“Whilst people can have their fears and they can have their theories, the government is required to act on information it has to make representations that people will be treated properly.”

“The government is still refusing to say what evidence they have to suggest there is any guilt,” she told reporters in Canberra.

The Senate later agreed to a Greens motion calling on Ms Gillard to retract her “prejudicial statements”. – AAP

Is the Australian government culpable in the Assange saga? Tell us below: