Prime Minister Julia Gillard says China and Russia have failed in their international responsibilities by vetoing a United Nations resolution against Syria's regime. 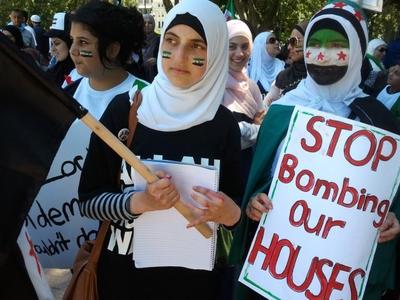 PRIME MINISTER Julia Gillard says China and Russia have failed in their international responsibilities by vetoing a United Nations resolution against Syria’s regime.

Both countries used their UN Security Council veto powers at the weekend to quash an Arab and Western-backed peace plan that called on Syrian President Bashar al-Assad to step down.

The draft resolution was aimed at stopping Assad’s deadly and worsening crackdown on anti-government protesters, who first took to the streets 11 months ago.

Ms Gillard says her government is firmly behind the peace plan first drafted by the Arab League.

“Which is why we are very disappointed to see exercise of these vetoes at the UN Security Council,” she told reporters in Canberra on Monday.

“We certainly think that was the wrong decision, the wrong path and an abdication of responsibility in the face of the violence that we are seeing in Syria.”

Ms Gillard said Australia would continue to push for the world to get behind the plan.

More than 5500 people are believed to have been killed in the Syrian bloodshed.

Foreign Minister Kevin Rudd says China and Russia must now bear particular responsibility for stopping the violence. He has repeatedly called on Assad to give up power.

The UN veto sparked angry attacks on Syrian diplomatic missions around the world, including in Canberra.

Dozens of people forced their way inside the Syrian embassy in the Canberra suburb of O’Malley on Saturday night, ransacking the ground floor and stealing money and equipment.

Police are investigating the incident but are yet to make any arrests.

Embassy charge d’affaires Jawdat Ali says the raid was an attack on both Syria and Australia.

“This incident is not only against our embassy, this incident happened on Australian land, so I think this is also a breach of Australia law,” he told AAP.

“I think the Australian government has a very strong point to raise against those people.”

Mr Jawdat expressed his appreciation to the Australian Federal Police for responding quickly to the embassy’s call for help.

“Without the federal police I think they would have caused more great damage than what they have,” he said.

The protesters were “barbarians” who had no discernible political objectives, Mr Jawdat said. – AAP

IMAGE: Australian Syrians protest in Hyde Park, calling for the Syrian president Bashar al-Assad to step down immediately, Sydney, Sunday, Feb. 5, 2012. More than 100 people gathered at the protest against Syria’s president as well as Russia and China’s veto of a UN resolution condemning violence in the country. (AAP Image/Lauren Farrow)