The federal government insists it has done just as much to help WikiLeaks chief Julian Assange as any other Australian in legal trouble overseas. 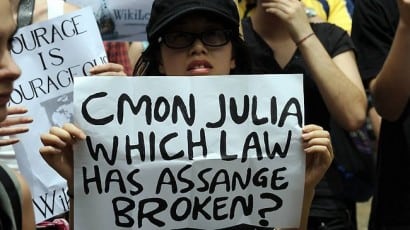 THE federal government insists it has done just as much to help WikiLeaks chief Julian Assange as any other Australian in legal trouble overseas.

And Prime Minister Julia Gillard says the government would insist on “due process” if the United States seeks to extradite the 40-year-old to face charges in America.

Assange on Wednesday lost a British Supreme Court appeal against extradition to Sweden to face questioning over sexual assault allegations.

Best known for revealing hundreds of thousands of secret US documents through the website WikiLeaks, Assange fears that extradition to Sweden could pave the way for extradition to the US to face possible espionage or conspiracy charges.

His lawyers have indicated they will seek to have the appeal reopened.

Following the result, Assange’s mother Christine renewed her criticism of the federal government.

“They’ve done everything they can to smear Julian and hand him up to the US.”

Rumours persist that US prosecutors have drawn up a sealed indictment against Assange but Ms Gillard says the government has no advice to that effect.

Foreign Minister Bob Carr said he was “proud” of the assistance the government has rendered to Assange since his arrest.

“There’s been no Australian who has received more consular support in a comparable period than Mr Assange,” Senator Carr told reporters.

He sought to play down the possibility the US will strike if Assange is sent to Sweden.

“Whatever the outcome of the appeals over the next fortnight, Mr Assange is not out of danger until the threat of extradition to the United States is entirely removed,” he said.

Opposition Leader Tony Abbott says Mr Assange is entitled to the normal consular assistance offered to Australian when they are overseas.

“No more and no less,” he told reporters. – AAP