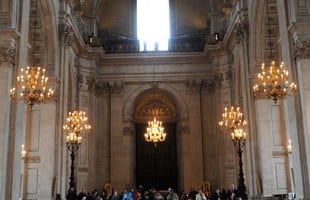 PRIME Minister Julia Gillard has invited John Howard to be Australia’s representative at the funeral of Baroness Thatcher to be held at St Paul’s Cathedral this Wednesday.

“I have invited the Honourable John Howard OM AC to represent the government and people of Australia at the funeral service,” Ms Gillard said in a statement.

The former British Prime Minister died aged 87 on 8 April and will be buried at a ceremonial funeral in London with full military honours.

Mr Howard is one of more than 2,000 people on the guest list for the funeral. He had been invited to attend the funeral service as one of 24 members of the Order or Merit (OM).

Ms Gillard told reporters in Australia Mr Howard had the “deepest connection” to Thatcher and should therefore represent Australia.

“It was the appropriate thing for him to represent the nation at the funeral,” she said.

“She is the greatest British prime minister since Churchill,” Mr Howard said.

“The true test of her greatness is to look at how she transformed her own country domestically and played a part with president Ronald Reagan and Pope John Paul II in bringing about the end of the Soviet empire.”

Downing Street said around 200 countries have been invited to send “an official representative”.

Invitees include all surviving former British prime ministers and US presidents, as well as Hillary Clinton, a representative of Nelson Mandela and FW de Klerk.

The former Soviet leader Mikhail Gorbachev and former first lady of the US Nancy Reagan will not attend due to ill health.

However, Argentina’s president Cristina Fernandez de Kirchner has not been invited following a number of comments about the Falklands deemed to be provocative.

“Who cares whether you are invited to some place you had no intention of going to?” Argentine Foreign Minister Hector Timerman responded.

The Queen will also be present. It is the first time since Winston Churchill died in 1965 the Queen has attended the funeral of one of Britain’s former leaders.

“People would find us a pretty extraordinary country if we didn’t properly commemorate with dignity, with seriousness, but with also some fanfare … the passing of this extraordinary woman,” he said.

Wednesday’s service will begin at 11am after Lady Thatcher’s body is transported from Westminster to St Paul’s Cathedral.

Lady Thatcher’s coffin will initially travel by hearse from the Palace of Westminster to the Church of St Clement Danes — the Central Church of the RAF — on the Strand. It will then be transferred to a gun carriage drawn by the King’s Troop Royal Horse Artillery and taken in procession to St Paul’s Cathedral.

Police officers will patrol the route with roads and bridges closed from 7am. Dozens of bus routes will be disrupted.

Details of the ceremony have been published, including the hymns To Be A Pilgrim, I Vow to Thee My Country and Love Divine, All Loves Excelling. The hymn He Who Would Valiant Be will be sung on request of Lady Thatcher. It was a favourite hymn from her childhood.