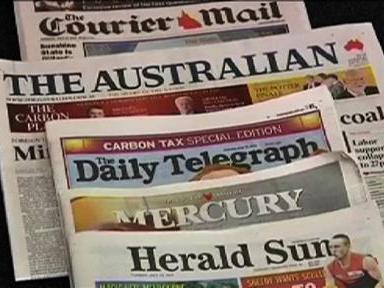 The company was also the worst-performing stock on the S&P/ASX50.

News Corp non-voting scrip backpedalled 3.91 per cent, or 56 cents, to $13.76 on a day the broader market finished flat.

Rebekah Brooks has resigned as chief executive of News International, the global media empire’s UK arm that published the now defunct News of the World.

Brooks, who was editor of the News of the World at the time some of the phone hacking was said to have occurred, was later arrested by UK authorities.

The scandal claimed another casualty when News Corp announced Les Hinton was stepping down as chief executive of Dow Jones and publisher of the Wall Street Journal.

Previously, Mr Hinton worked for 12 years as executive chairman of News International, leaving to take up the position at Dow Jones in December 2007.

IG Markets institutional dealer Chris Weston said market players were fearful the crisis, which started at the News of the World, would hit the company’s US and Australian operations.

“It’s the fear of contagion across the other divisions that are causing people to worry a little bit here,” he said.

“I think there are also people selling first and asking questions later.”

Brooks, News Corp head Rupert Murdoch and his son James Murdoch were due to front the UK parliament on Tuesday and answer questions over the matter.

One fund manager, who declined to be named, said some investors may have decided to offload News Corp stock ahead of the trio’s appearance before the UK parliament.

“In that environment it is a bit early for people to be stepping up and getting positive on the stock,” the fund manager said.

“You are also going to have a lot of people who are still more inclined to sell given the corporate governance issues.”

Revelations News of the World hacked into the voicemails of terrorist victims, relatives of those killed at war, a missing schoolgirl later found murdered and celebrities and politicians, has already caused News Corp much pain.

It shut down the 168-year-old Sunday tabloid, withdrew a bid to take full ownership of British Sky Broadcasting, and bought advertising space at all its rivals to issue an apology.

London police commissioner Paul Stephenson has also resigned amid allegations police officers were paid by News of the World as part of the phone hacking scandal.

Authorities in the US, where News Corp owns newspapers and television stations, among other properties, are also considering an investigation into whether the company broke any US laws.