An Obeid family accountant has told the ICAC Eddie Obeid received a direct benefit from the sale of a coal tenement in the Bylong Valley. 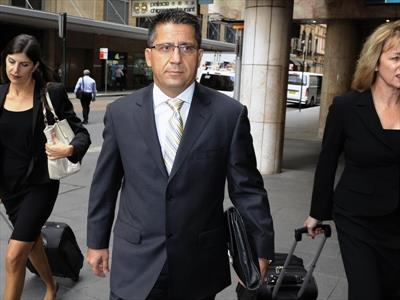 AN ACCOUNTANT for the Obeid family has admitted to a corruption inquiry that his job included hiding their name from the public, but says he’s not their “front man”.

An Independent Commission Against Corruption (ICAC) inquiry into the opening up of coal mining in the NSW Upper Hunter heard evidence on Tuesday from long-time Obeid accountant Sid Sassine.

The ICAC is probing whether former NSW Labor minister Ian Macdonald rigged a 2008 bid process for coal exploration licences in the Bylong Valley and how former Labor powerbroker Eddie Obeid may have benefited.

Giving evidence, Mr Sassine denied he was a front man for the family, but admitted that his role as their accountant involved hiding the Obeid name from the public.

“My role there is to conceal, yes, to hide the name Obeid from the general public, to avoid the hindrance that they’ve consistently had,” he said.

The inquiry was told the Obeids had more than 20 trusts to structure their financial affairs, which had previously been “fragmented”.

The ICAC was also told that the family paid $4.6 million in tax on $25 million of “pure profit” relating to a payout on a mining venture in the Bylong Valley.

Mr Sassine conceded to Mr Watson that he regularly found “anomalies” in the Obeids’ financial accounts.

However, he denied that the Obeids kept two sets of books for their accounts.

“Absolutely not,” Mr Sassine said when pressed on that point by Mr Watson.

The inquiry also heard that Eddie Obeid received a “direct benefit” from the sale of the critical Mount Penny tenement.

“So Eddie Obeid did receive a direct benefit, a payment straight out, from the sale of the Mount Penny tenement? Is that what you’re telling us?” Mr Watson asked.

“Yes, he has,” Mr Sassine replied.

Mr Watson suggested that Mr Obeid received $1.5 million from the Mount Penny sale and that the money “went to reducing his other debts”.

Mr Sassine replied by saying the money “would not have been entirely from the Mount Penny sale” and some of it had been directed to Mr Obeid’s wife, Judith.

At one point, Mr Watson labelled the Obeids’ financial affairs “a shambles” that “don’t make sense”.

“No, it’s not a shambles,” Mr Sassine retorted.

He subsequently conceded he had not conducted an audit to determine whether what the Obeids had told him was true or false.

The inquiry was informed later that John Gerathy, a business associate of Ian Macdonald, would not give evidence to the ICAC because he was suffering from a mental illness.

“I’m only interested in the money trail,” Mr Lockley said.

The inquiry will continue on Wednesday. – AAP