Howard thinks Rudd could make a comeback for top job

Former prime minister John Howard says he thinks Kevin Rudd could try for the leadership again before the September 14 election. 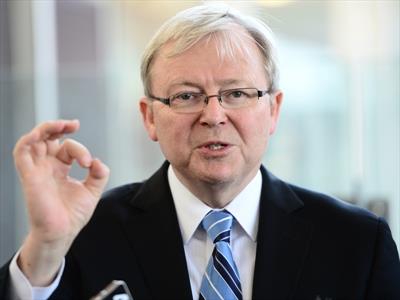 FORMER prime minister John Howard says Kevin Rudd – the man who beat him in 2007 – could make a move for the Labor Party leadership before the federal election.

“The extraordinary thing about the politics in the last few years was Kevin Rudd’s removal,” he told the Nine Network on Monday.

“It’s very unusual for somebody who wins an election and then they get rid of him before he’s got the chance of going to the next election.”

He said Mr Rudd could try for the Labor leadership again before the September 14 election.

“Politics in the end is driven by the laws of arithmetic.”

He said the aggressively personal nature of the current parliament was understandable and was due to it being a hung parliament.

“The government can’t get clear air because the majority of people didn’t vote for it,” he said.

“The opposition thinks `gee they didn’t win’, so they naturally put pressure on.

“All of that is very understandable.”

It’s not the first time Mr Howard has predicted a comeback for Mr Rudd. Last May he said he believed it was “more likely than not” that Labor would bring Mr Rudd back before the next federal poll.-AAP