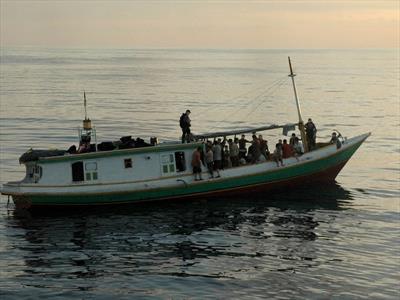 THE government is seeking urgent legal advice and cabinet will convene to discuss its options – including a possible return to Nauru’s processing centre – after the court ruled the controversial Malaysia refugee swap plan unlawful.

The court’s full bench agreed 6-1 that Immigration Minister Chris Bowen’s declaration that Malaysia was an appropriate place to send asylum seekers was wrong.

“The declaration … was made without power and is invalid,” Chief Justice Robert French said in court on Wednesday.

The court ruled a country must be bound by the UN Refugee Convention or its own domestic laws to protect asylum seekers to qualify as an appropriate destination.

The court ordered its injunction against removals to Malaysia be made permanent.

Asylum seekers in detention on Christmas Island danced with joy, cheered and clapped when the ruling was made.

Two hours later, Mr Bowen conceded the decision was a massive blow for the government.

Mr Bowen said all options were now on the table – including sending asylum seekers to Nauru, a critical element of the Howard government’s so-called Pacific Solution that Labor scrapped with much fanfare in 2008.

But the minister said the court’s far-reaching ruling could also prevent the government reopening the processing centres on Nauru and Papua New Guinea’s Manus Island.

“This decision has potential ramifications for not only our arrangement with Malaysia but offshore processing more generally,” he said.

Mr Bowen – who repeatedly expressed confidence the policy would survive the High Court challenge brought by refugee lawyers – conceded people smugglers would capitalise on the decision and send more boats to Australia.

He accepted responsibility for the policy’s failure but noted it had been endorsed by cabinet “at every step”.

But despite also presiding over the failed “East Timor Solution”, Mr Bowen said he would not resign his post.

“I’ve got obligations to the government and the nation to see this issue through,” he said.

Mr Bowen said the court’s decision – which cannot be appealed – was not in line with what was previously considered as accepted law. The court had applied a “new test”, he claimed.

Under the deal first announced by Ms Gillard on May 7, the government planned to send 800 asylum seekers to Malaysia in exchange for 4000 already processed refugees. Mr Bowen said he was “inclined” still to accept the 4000.

But more than 330 asylum seekers who have arrived since the government inked the Malaysia deal in July will remain in limbo on Christmas Island until the government can consider its position.

Refugee lawyer David Manne called on the government to respect the ruling and move quickly to process his clients’ asylum applications in Australia.

“The real point here is that we have represented some people who came to Australia seeking protection,” he said.

“I call on the government not to leave them locked up in limbo.”

The Australian Greens echoed Mr Manne’s plea and declared they would not support any legislation to undermine the court’s ruling.

Opposition Leader Tony Abbott called Labor an incompetent government that could not get anything right.

“This is a government mired in incompetence,” he said in a statement.

“In Julia Gillard’s year of delivery, the government has hopelessly failed to deliver.”

Opposition immigration spokesman Scott Morrison called on the government to release its legal advice so the public could see how it “got it so wrong”.

“The decision will bring welcome relief to many asylum seekers who have come to this country seeking a better life and freedom from persecution and fear for themselves and their families,” he said.

Former Labor powerbroker Graham Richardson said the decision made the government look like a joke: “They didn’t just go down, they got slaughtered.”

West Australian Premier Colin Barnett said it would be to Labor’s “eternal shame” it ever proposed the policy.