A colony of healthy Tasmanian devils is about to get a new island refuge as part of an attempt to beat the deadly facial tumour depleting the species. 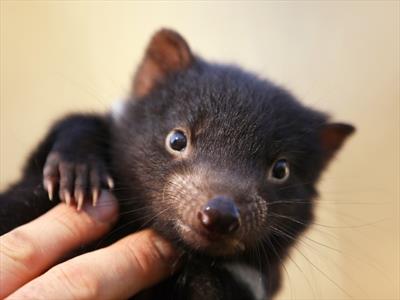 A COLONY of healthy Tasmanian devils is about to get a new island refuge as part of an attempt to beat the deadly facial tumour depleting the species.

Fourteen devils will this week be the first to move to Maria Island, off the east coast of Tasmania, in the hope they will be quarantined from the disease.

The aim is to establish a self-sustaining population of healthy devils on the island, listed as a national park, where the species is not found naturally.

The move is part of the joint state and federal Save the Tasmanian Devil Program funded with $10 million over five years by Canberra.

“We are leaving no stone unturned when it comes to protecting the Tasmanian devil,” federal Environment Minister Tony Burke said in a statement.

“Translocation is one of the methods of last resort and it has to be done carefully with good scientific oversight.

About 50 devils are planned to be released on the island over the next two years.

They are sourced from an “insurance population” of about 500 healthy devils in Tasmania and interstate.

The Maria Island devils will be monitored and their numbers reduced if they negatively impact the environment, the governments say. – AAP