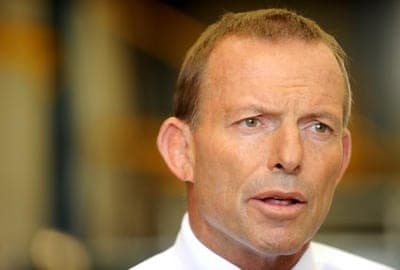 THE federal government has warned that coalition plans for workplace law could lead to workers being paid in pizzas rather than cash, but Opposition Leader Tony Abbott says his policy is fair and balanced.

After launching the long-awaited document on Thursday, Mr Abbott took to the hustings in the NSW rural seat of New England on Friday to campaign with high-profile Nationals lower house candidate Barnaby Joyce.

Workplace Relations Minister Bill Shorten was critical of the coalition policy’s aim to expand the use of individual flexibility arrangements (IFAs), which Labor created under the Fair Work Act to provide a better work-life balance.

Mr Shorten said IFAs would be turned into individual contracts under the coalition.

“They are proposing that if you work in a fast-food business, that if your individual flexibility agreement says you can be paid pizzas to the value of what you would have been paid in cash, well, that would pass the Liberal test.”

Mr Abbott said Julia Gillard, the workplace minister who brought in the Fair Work Act, herself had said in 2009 that “no worker can be worse off” under IFAs.

“Now, I don’t normally agree with the prime minister, but for once she had it right and for once she was being straight with us,” Mr Abbott said.

Ms Gillard told reporters in Port Moresby, on her first official visit to Papua New Guinea, that it was “absurd” for Mr Abbott to suggest his changes would have no impact on workers.

The opposition leader also fended off criticism from former Howard government minister Peter Reith, who said the changes did not go far enough to improve the economy.

“They’re prudent, they’re balanced and they will bring the workplace relations pendulum back to the sensible centre,” Mr Abbott said of his reforms.

Taking time out from preparing the budget, which he will deliver on Tuesday, Treasurer Wayne Swan told reporters in Canberra Mr Abbott was trying to “sugarcoat” his policy.

Shadow treasurer Joe Hockey said in a pre-budget YouTube statement that the numbers to be released by Mr Swan “won’t be the truth about the real state of the nation’s finances”.

“The truth is we know that when it comes to Labor they will tax you more and they will waste your money,” Mr Hockey said. – AAP