Take a virtual tour of one of the seven natural wonders of the world - Australia's Great Barrier Reef - all from the comfort of your own couch. 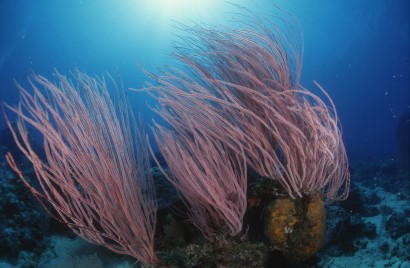 Now you don’t even need to leave the comfort of your couch in order to take a tour of one of the seven natural wonders of the world — the Great Barrier Reef. The world’s largest coral reef system, stretching 2,600 kilometres down the coast of Queensland in north-east Australia, is open for virtual bookings. A series of high-resolution, 360-degree images of the reef has just been released through Google Maps and Google Earth, instantaneously available to more than one billion people online simply by logging on to Street View.

As part of the Catlin Seaview Survey, which documents the health of coral reefs around the world, 15,000 images of the Great Barrier Reef have been captured using the world’s first tablet-operated underwater camera — the SVII. Incorporating three individual cameras sitting on an underwater scooter operated by a diver, the collection of images will over the life of the project be boosted up to 50,000.

Project director Richard Vevers told media at the launch of the survey in Monetery, California, that it is a completely unique piece of technology. “On a typical run we’ll take over 1000 panoramas, which are then stitched together to produce this virtual dive experience.”

In addition to transporting viewers “under the sea”, the images are also vitally important in improving our knowledge of the life of coral reefs. Scientists involved in the survey will be in particular looking to how the endangered ecosystems of the Reef are responding to climate change. As the project’s chief scientist, Professor Ove Hoegh-Guldberg from the Global Change Institute at the University of Queensland notes, almost 25 per cent of marine species live in and around coral reefs. “The possibilities of what we will discover about coral reefs are almost endless.”

The survey, reaching down into depths of up to 100 meters, could also be key to discovering new species and assessing whether rapid climate change has had a life-threatening effect of coral reefs. “There are so many species that are yet to be discovered in this zone,” says Vevers. “We’ll be going to places that no one has ever seen before or visited before – it’s a very exciting area to research.”

To view footage captured on the reef, viewers can go to Catilin’s Google+ page — now with 1.4 million followers. The first live night-time dive is scheduled to take place at 3.30am Australian Eastern Standard Time on Thursday. For UK viewers, that’s 6.30pm this Wednesday 26 September.