Google Glass; Up close and personal

During a meeting with Google’s Senior Vice President, Julia Gillard had the privilege of trying Google Glass, a high tech pair of glasses, which act like a smart phone. Google is now inviting everyone to explore the product. 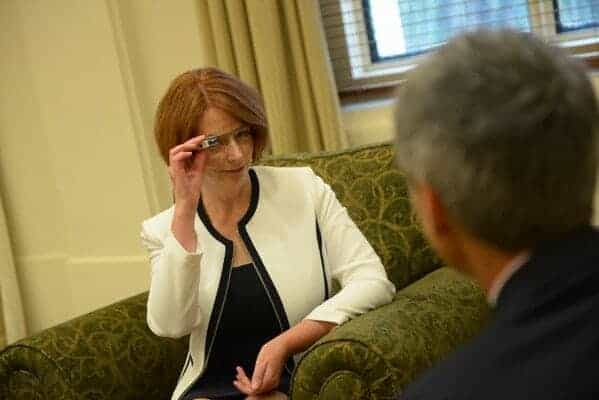 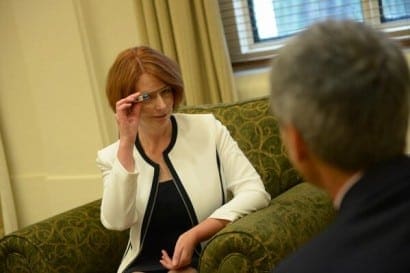 IT’S NOT often one envies Julia Gillard, and it’s even less often one envies what she’s wearing, Her choice of eyewear in recent times has been particularly questionable. However when the prime minister was spotted with a prototype of Google Glass, technology enthusiasts everywhere started turning green.

Google Glass, a recent Google development, is a high tech pair of specs which displays information in a smartphone-like format. It has a built in camera, microphone and speaker technology, which will allow users to interact with the device via voice commands.

Much like a smartphone, Google Glass will allow users to take pictures and record what they see, all hands-free. They will be able to use the device to share images and live footage, get directions, send messages, translate words, and receive information via the Internet.

The product has been developed through Google X Lab, a secret facility run by Google, which focuses on developing future technologies, including Google Glass and Google Driverless Car.

The device, which is not expected to be available to the public until 2014, is estimated to cost between $750USD and $1500USD.

So just how did Julia Gillard get a pair?

Ms Gillard met with Google Senior Vice President, Patrick Pichette, the current Chief Financial Officer of Google Inc. She tweeted that they were meeting to discuss topics such as tax issues for multinational corporations and how Google will help with the National Broadband Network (NBN).

During the meeting Julia Gillard had the opportunity to try Google Glass. She looked like she enjoyed wearing the head mounted display, but kept followers in the dark as to what she thought about the product.

Google have released a promo for Google Glass on YouTube, although it does not include any live footage recorded by the Prime Minister. The promo, which is not for anyone who suffers from vertigo, provides greater insight into how it will feel to use and wear the product.

As part of this campaign, Google have also invited all “bold creative individuals” to join them and be part of shaping the future of glass. To be selected, applicants must answer via Google+ or Twitter ‘what would you do if you had Glass?’ The deadline is 27 February. If chosen Google will invite you to become a Glass Explorer and you’ll receive and attend a special pick-up experience, in person, in New York, San Francisco or Los Angeles.