Gina Rinehart's "insulting" advice on how to become a millionaire by working hard and not drinking and smoking shows she's out of touch with ordinary Australians, critics say. 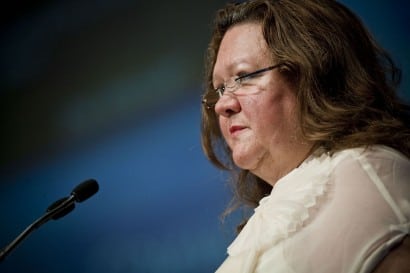 GINA RINEHART’S “insulting” advice on how to become a millionaire by working hard and not drinking and smoking shows she’s out of touch with ordinary Australians, critics say.

Australia’s richest woman says the nation has lost its hard-working roots and millionaires are self-made.

“If you’re jealous of those with more money, don’t just sit there and complain; do something to make more money yourselves – spend less time drinking, or smoking and socialising, and more time working,” she says in a paper on the Institute of Public Affairs website.

She suggests lowering the minimum wage and cutting taxes to stimulate employment.

“That helps as well,” he told reporters in Cairns, agreeing that billionaires were out of touch with ordinary Australians.

Treasurer Wayne Swan said Ms Rinehart’s comments were an insult to the millions of Australian workers who slog it out to feed the kids and pay the bills.

“Tony Abbott is Gina’s knight in shining armour when it comes to fighting for tax cuts for her and Clive Palmer,” he said in a statement.

“The question for Tony Abbott today is, does he agree with Gina Rinehart that Aussies are lazy workers who drink and socialise too much?”

Mr Abbott has yet to respond publicly to Ms Rinehart’s remarks.

Construction Forestry Mining and Energy Union national president Tony Maher said Ms Rinehart’s other claim that millionaires and billionaires were doing the most for social good come as she is readying to import foreign labour.

“What planet is she living on?” Mr Maher said.

Mr Katter said Ms Rinehart has been given the go-ahead by state and federal governments to bring in thousands of foreign workers.

But she says that would probably be against regulations today.

Mining tycoon Clive Palmer says he doesn’t agree with Ms Rinehart about lowering the minimum wage or how to become a millionaire but she is entitled to her views.

“Well, I spend a fair bit of time socialising, drinking and going to the football and things like that,” he told the Brisbane Times.

“That’s her advice. If she doesn’t want to do that she can make money all day.”

“I think this view of hers is just plain wrong, and life’s more complex than that,” he said.

Mr Rudd said his wife, Therese Rein, employed about 3000 people around the world based on her own efforts as a businesswoman.

“(She) has built her own business empire on the basis of her own grit, determination and starting with absolutely nothing,” he said.

Is Gina Rinehart right or wrong with her comments? Tell us below: