Mining magnate Gina Rinehart has failed in a bid to dismiss the NSW Supreme Court proceedings her three eldest children have taken against her. 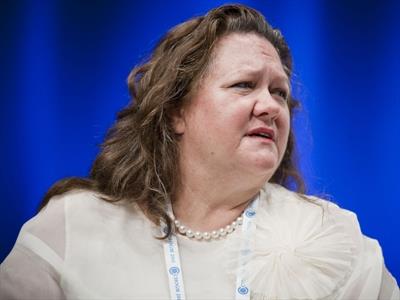 MINING magnate Gina Rinehart has failed in a bid to dismiss the NSW Supreme Court proceedings her three eldest children have taken against her.

John Hancock, Bianca Rinehart and Hope Welker are seeking to oust their mother as trustee of the multimillion dollar family trust.

They claim she acted “deceitfully” and with “gross dishonesty” in her dealings with the trust, set up in 1988 by her father Lang Hancock, with her children being the beneficiaries.

Ms Rinehart is supported by her youngest daughter, Ginia, in the bitter family battle.

Ms Rinehart sought to have the proceedings against her summarily dismissed, primarily on the grounds there was no reasonable cause to remove her given she amended the trust to advance the vesting date.

This means the children can now call for their shares in the family company, Hancock Prospecting, although the court has heard that step could involve tax consequences.

Ms Rinehart claimed maintaining the proceedings in light of the vesting of the trust was frivolous, vexatious and an abuse of process.

She argued that as a result of the vesting, her duties as trustee were now limited and her discretions gone.

But in a judgment handed down on Wednesday, Justice Paul Brereton said this “considerably overstates the position”.

“The trustee continues to hold the trust property, to exercise votes in respect of the trust shares, and to receive and distribute trust income. She could sell the trust property and reinvest the proceeds. She has all the usual rights, powers and duties of a trustee,” he said.

He noted the fact that “the trustee has announced that she is prepared to transfer the trust shares to the beneficiaries upon being called upon to do so, does not necessarily extinguish any concern that might arise from her past alleged behaviour”.

However, he refused their application to add a claim for relief on the grounds Ms Rinehart unnecessarily exposed the children to the risk of capital gains tax liability as a result of the vesting of the trust.

This proposed amendment was “vexatious and embarrassing”, he said.

The matter returns to court at a later date. – AAP