Gillard to push ahead with reform

Prime Minister Julia Gillard says she will deliver all her promised "big legislation" in the coming session of parliament, including the carbon tax, mining profits tax and hospital reform, while new poll puts her ahead of Abbott. 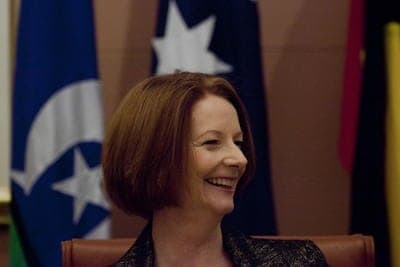 AS the parliament returns from the winter break, the Labor leader – whose personal rating is starting to rise after taking a battering over the carbon tax and other issues – has urged her ministers and backbenchers to talk up the government’s reform agenda.

“In this parliamentary session we’ve got some big legislation to deliver, legislation that’s right in the Labor tradition,” she told a meeting of her ministry in Canberra on Monday morning.

The prime minister said she understood Australians were watching global economic developments with some concern, but there was “no better place in the world to be than Australia as we deal with this global instability”.

She told a caucus meeting later, ahead of Tuesday’s sitting, that the government would not “leave anyone behind”, pointing to proposed reform in the areas of disability and aged care.

Gillard gains in latest polls
Her comments came as two polls showed the prime minister’s stocks were rising, but the coalition holding on to an election-winning lead.

The latest Nielsen poll published in Fairfax newspapers showed the coalition holds a two-party-preferred vote of 58 per cent, down three points.

There’s been a four point jump in the prime minister’s approval rating, to 38 per cent, while her disapproval has fallen five points to 57 per cent.

It came after Ms Gillard announced a deal with Malaysia on asylum seekers, resumed the live cattle trade to Indonesia and unveiled health reforms.

At the same time the approval rating for Mr Abbott – who has been in Europe on leave for just over a week but returned to Canberra on Monday for a shadow cabinet meeting – is down four points to 43 per cent and his disapproval rating is up four to 52 per cent.

The poll also for the first time in weeks gave the Labor leader a narrow lead as preferred prime minister.

Mr Abbott told reporters that this week marked the anniversary of the Labor leader pledging there would be no carbon tax – a pledge she broke after the federal election.

But Mr Abbott’s bid to shift the focus back onto the carbon tax looks set to be distracted by calls within his party for workplace reform.

Mr Abbott would not respond directly to the comments, only saying the coalition’s policy would be “based on problem solving not ideology”.