Prime Minister Julia Gillard has saluted Kevin Rudd for his key role in Australia winning a UN security council seat, as the opposition talked down the achievement and talked up the cost. 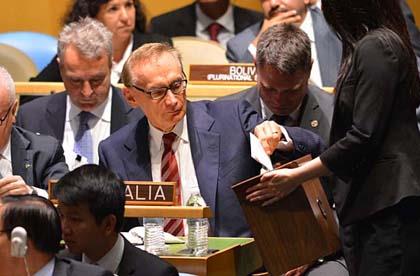 PRIME Minister Julia Gillard has saluted Kevin Rudd for his key role in Australia winning a UN security council seat, as the opposition talked down the achievement and talked up the cost.

In a ballot in New York early on Friday morning (AEDT), Australia secured 140 votes from 193 United Nations members for a clear win in its bid to sit on the UNSC for two years from January 1, 2013.

It has been 27 years since Australia, a founding member of the UN, last sat on the UNSC and the win showed the nation had a high international reputation and strong bilateral ties, Ms Gillard said.

“We will be dealing with issues of importance to our nation including the UN engagement with the mission in Afghanistan and the future of that mission beyond 2014,” Ms Gillard told reporters in Canberra on Friday.

“And it is the security council which will have to continue to wrestle with the violence in Syria and the way in which that violence can be brought to an end.”

Ms Gillard told delighted Department of Foreign Affairs and Trade staff in Canberra, just hours after the vote, that Mr Rudd was owed the highest thanks.

“(He) had the foresight as prime minister to put our name forward and to commence the bid process, and then to pursue it so energetically as minister for foreign affairs,” Ms Gillard said.

Through a spokesman, Mr Rudd congratulated the diplomatic service, the prime minister, Foreign Minister Bob Carr and parliamentary secretary for foreign affairs Richard Marles “for their strong and successful advocacy for Australia”.

Opposition Leader Tony Abbott said the win owed as much to Mr Rudd as it did to his successor.

Australia’s UN representative Gary Quinlan will spearhead the country’s role on the body, attending as an observer from November.

The federal opposition questioned the $25 million cost for the bid and accused the government of skewing its foreign aid program to secure the votes of poor nations.

But Ms Gillard said: “To uphold Australia’s reputation up high and put us on a body of such importance to the world, I consider that money well spent.”

The prime minister rejected News Corporation boss Rupert Murdoch’s view that Australians would not care about the win.

Opposition foreign affairs spokeswoman Julie Bishop said while the win was welcome, the government had failed to articulate what it hoped to achieve.

“The ultimate test will be in terms of success, what we have achieved for the benefit of the Australian people after two years,” Ms Bishop said.

Shadow treasurer Joe Hockey said: “If the United Nations helps us to stop the boats, then it is a worthy investment.”

The Department of Foreign Affairs and Trade has made a submission to Treasury seeking a boost to resources in New York and Canberra to service the new role.