Prime Minister Julia Gillard will reshuffle her ministry after she and Kevin Rudd declared the Labor leadership issue over. 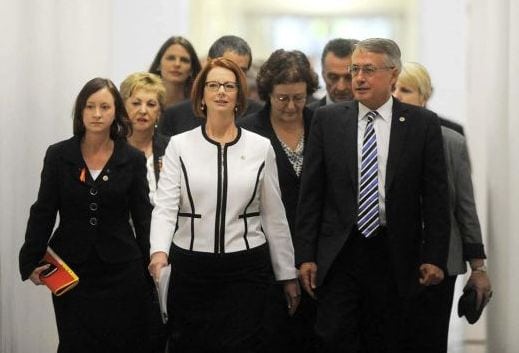 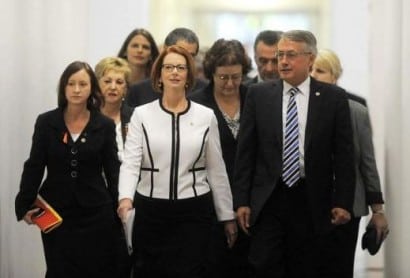 PRIME Minister Julia Gillard will reshape her ministry for the sixth time in almost three years after Kevin Rudd ruled out any further destabilisation and eight of his supporters stood down.

After months of internal bickering, Mr Rudd guaranteed that “under no circumstances” would he try to return to the Labor leadership and pledged his “100 per cent support” to Ms Gillard.

“The time now is to bind up the wounds,” he told reporters in Brisbane.

In northern NSW, Ms Gillard told reporters: “This issue has been resolved for all time.”

Mr Rudd and his resigning supporters on Friday described some of the backroom events that led to Thursday’s unprecedented and dramatic events in Parliament House in Canberra.

Mr Crean brought months of leadership talk to a head when he went to Ms Gillard declaring his support for Mr Rudd and seeking a caucus ballot.

However, Mr Rudd and most of his supporters said they were unaware Mr Crean planned to make what Mr Rudd described as a “spontaneous combustion” statement to reporters.

At a meeting in Mr Rudd’s office just before the caucus ballot on Thursday, he was told there was “zero” chance of getting a majority of votes.

His backers advised him not to run, and he accepted this – saying his actions were line with a promise made in February 2012 not to run again unless there was a clear majority of MPS in favour.

Ms Gillard will now spend the weekend reshuffling her cabinet with an announcement expected early next week, before the federal government community cabinet meets in Perth on Wednesday.

The departure of four ministers and parliamentary secretary Richard Marles gives her ample opportunity to reward her own supporters and elevate new talent to ministry and cabinet ahead of the federal election.

“It’s right to be giving the prime minister the opportunity to have people around her who are totally supportive of her and to give her the best chance at the election later this year,” he said.

Mr Ferguson, who will recontest his seat of Batman, said he had supported Mr Rudd to give Labor a “fresh start” after 27 bad opinion polls in a row for Labor.

He warned if Labor didn’t unite and change now it faced a wipeout on September 14 similar to that in 1996, when the Howard coalition government was elected.

“But make the most of it, we only get one chance and if we don’t pull it together I only hope we are not back to `96 when we had 49 people.”

Mr Bowen, who will also recontest his Sydney seat of McMahon, said a strong Labor party was vital.

“Labor’s the only party that believes in growth and opportunity,” he said.

Independent MP Rob Oakeshott said it was too early to tell how the government would go from here.

“It could be the enema the Labor party needed or the start of a complete implosion,” he told AAP. – AAP