Julia Gillard is failing to lead the government toward functional and decent policy in line with supposed ALP traditional values because she's so focused on a race to the bottom with her old morning breakfast sparring buddy, Mr Abbott. 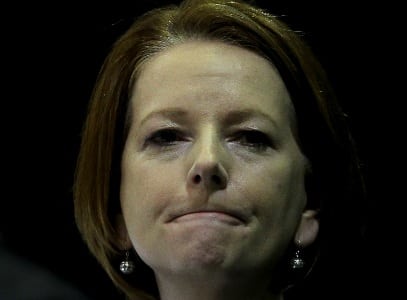 ACTUALLY, an extraordinary opportunity was handed to federal ALP last week when the High Court ruled the Malaysia refugee swap deal to be unlawful. But of course, they blew it.

This decision quashed the Gillard government’s plans to deport people arriving to seek asylum in Australia and in turn accept refugees based in Malaysia who have already been processed and granted refugee status. So, we were just sort of hoping Malaysia would sort out all that pesky paperwork.

Immigration Minister Chris Bowen has been desperately attempting to sell the government’s human trade scheme with promises of “smashing the people smugglers business model” (see, this story needs a villain).

Meanwhile, some Australians were celebrating the historic ruling and feeling “profoundly disappointed” by their government’s audacious attempt at flogging a dead ‘solution’ and its subsequent lashing out at the nation’s legal system when it called the decision an act of “judicial activism” (hat tip, PM Julia Gillard).

The ALP have been failing to hit the mark in convincing the Australian public that this refugee solution is actually a solution, ever since it was announced.

This, many argue, is largely indicative of the ALP more broadly, who for months (or, let’s be honest, years) have been unable to find a demographic willing to embrace their increasingly confused politics.

Certainly no longer (or weren’t ever?) the party for the working class (whatever that is), and hardly a centre-left party (so desired to balance those non-liberal Liberals): so what exactly does the ALP stand for (and who let them run the country)?

A popular response to such a question is another question: They’re the option that is not Tony Abbott, and would we rather him in the top job? One could argue that he at least has a decidedly solid demographic and policies that align with said demographic in a not-so-surprising way.

That said, I’m not going to argue we’d be better off under Abbott’s leadership. Rather, for now, let’s just focus on the rapidly unfolding disaster that is the federal ALP.

Since taking office Julia Gillard has hardly wowed the nation with her leadership ability, she has been mocked by both sides of politics for oh-so-many reasons.

For one, Gillard has used the immigration policy, and specifically the handling of asylum seekers, as simply an effort to take on the Opposition. Gillard is failing to lead the government toward functional and decent policy in line with supposed ALP traditional values because she’s so focused on a race to the bottom with her old morning breakfast sparring buddy, Mr Abbott.

This week Gillard had an opportunity to take a strong and compassionate policy stance and admit that this time maybe she and the party had got it wrong.

Of course that didn’t happen, fingers were pointed, blame was shifted and another opportunity for ALP to lead was wasted.

And so what advice should we offer the continuing circus that is the federal government? My tip would be that principled policy can be strategic, and popular, if one cares to consider leading, not merely reacting.