Federal Labor’s primary vote stands at just 30 per cent, according to a new poll, but the PM says she isn’t worried. 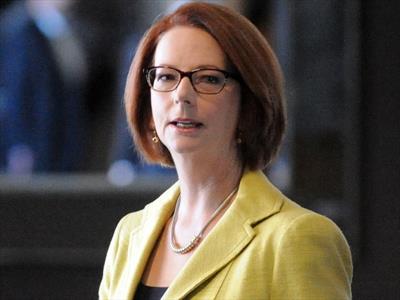 “If I spent time worrying about them and commentating on opinion polls then I wouldn’t have the time to get my job done.

“So each and every day I just let that wash through and I focus on what I need to do as prime minister.”

Asked if her colleagues had given her a deadline to turn the polls around, Ms Gillard said: “Certainly not.”

Federal Labor’s primary vote stands at just 30 per cent, down five points since December, according to the latest Herald/Nielsen poll published in Fairfax newspapers.

Support for the coalition is up four points, taking its primary vote to 47 per cent – its highest level since just after the carbon tax began in July 2012.

On a two-party-preferred basis, Labor’s support is at 45 per cent, well behind the 55 per cent for the coalition, according to voter feedback on the direction of second preferences.

Based on preference flows from the 2010 election, the two-party split is 44-56 in favour of the coalition.

Opposition Leader Tony Abbott has also overtaken Ms Gillard in the preferred prime minister stakes, with his support leaping nine points to 49 per cent compared with Ms Gillard on 45 – down five points.

The national poll of 1400 voters found the popularity of former prime minister Kevin Rudd has also grown, with Mr Rudd favoured by 61 per cent of respondents to just 35 per cent for Ms Gillard.

Commenting on continuing speculation of another leadership challenge by Mr Rudd, Ms Gillard said “all of these issues were resolved by the Labor team in February last year”.

Nielsen pollster John Stirton said much of the support for Mr Rudd as leader came from coalition voters.

“But when you’re behind on primary votes as much as Labor is you need some of those voters to switch sides,” he told Sky News.

“So in a sense that makes that more significant than the fact that Malcolm Turnbull is also the preferred leader over Tony Abbott.”

He said the drop in Labor’s primary vote hadn’t cancelled all the gains the party made last year but it had wiped out “a reasonable chunk”.

He thought part of Mr Abbott’s gain in the preferred prime minister stakes could be attributed to the opposition leader’s more measured performances in parliament during the first two sitting weeks of the year.

Also, Mr Abbott’s speech on the legislation to recognise indigenous people got a bit of a run in the media.

“That allowed some voters to see a different side of Tony Abbott than they’d seen previously,” Mr Stirton said.

Labor MP Nick Champion put Mr Abbott’s gain down to his being “in hiding, wrapped up in cotton wool and not doing any interviews of any substance”.

Liberal backbencher Steve Ciobo said his party wouldn’t be taking anything for granted, even with such good poll numbers.

“Politics is volatile, things can change,” he told Sky News.

“We have got to campaign every single day.”

He said that is what the government must do in order to have the confidence of the Australian people that they are being listened to and working on policies, such as Sunday’s innovation plan.

“This is a perfectly reasonable position on behalf of the Australian people,” he said. -AAP