The NSW federal MP who threatened to get a tattoo to show his loyalty to the prime minister has won a double-headed promotion in the latest Labor government reshuffle. 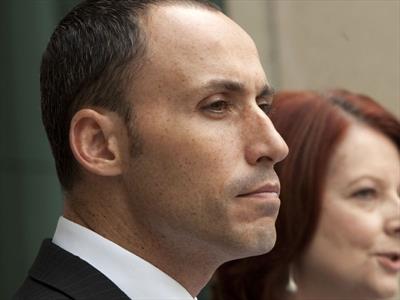 THE NSW federal MP who threatened to get a tattoo to show his loyalty to the prime minister has won a double-headed promotion in the latest Labor government reshuffle.

David Bradbury, the member for Lindsay – the fourth most marginal seat in the country – will become assistant treasurer alongside Treasurer Wayne Swan.

He also takes on the newly created position of minister assisting for deregulation, working with Finance Minister Penny Wong.

Mr Bradbury said he was “immensely proud” of his appointments.

“Only Labor governments are prepared to tackle the hard, long-term reforms that create opportunities for working Australians and build a platform to lift the standard of living of all Australians,” he said on Friday in a statement.

“I am greatly honoured to be in a position to help shape the economic debate and to be a part of a government that continues this great Labor tradition.”

Congratulating Mr Bradbury, Treasurer Wayne Swan said he had done some “great work” in his role of parliamentary secretary to the treasurer.

“(He) brings strong expertise in the areas of tax and deregulation,” Mr Swan said.

Mr Bradbury was appointed as parliamentary secretary after the 2010 election, having first been elected to the House of Representatives in 2007.

In the run-up to this week’s leadership stoush between Julia Gillard and former Labor leader Kevin Rudd, Mr Bradbury denied he was in the “undecided” camp and was “one of her strongest supporters”.

“If it means getting a tattoo, I would consider it,” he told reporters at a media doorstop with the prime minister, although he thought his wife would have something to say about that.

In her second ministerial reshuffle in three months, prompted by the resignation of Mr Rudd as foreign minister, Ms Gillard appointed Queenslander Bernie Ripoll as the new parliamentary secretary to the treasurer.

Mr Swan said Mr Ripoll, the member for Oxley, “has a great understanding of business conditions on the ground and oversaw the important inquiry into financial services”.

Ms Gillard also promoted Victorian Brendan O’Connor to cabinet to take the position of small business minister, as well as minister for housing and homelessness.

Mr O’Connor, the member for Gorton, moves up from minister for human services and school education.

“It is the aspiration of many working people to create their own small business and for that to be their future, and I believe that small business should be represented at the cabinet table.”

“The elevation of the portfolio to cabinet will do nothing for small business if the government doesn’t cut red tape and scrap the carbon tax,” Mr Billson said.

“You just have to look at Labor’s record on small business to know it has been dragged kicking and screaming by the sector to follow the coalition’s lead on partnering with small business by giving the sector a cabinet level minister.” – AAP