Julia Gillard has vowed to lead Labor to the next federal election, dismissing mounting speculation over her political future following the collapse of the Malaysia asylum swap policy. 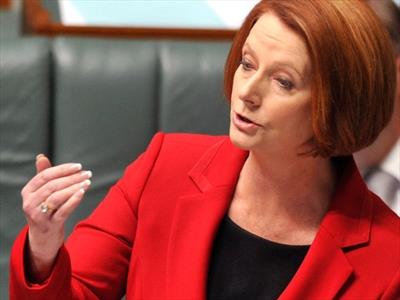 JULIA GILLARD has vowed to lead Labor to the next federal election, dismissing speculation over her political future.

“I’m not going anywhere. I’ve got too much to do,” a defiant prime minister said on Friday.

Senior Labor figures moved to shore up support for their leader as she battled to contain the fallout from a High Court decision quashing the government’s asylum seeker swap deal with Malaysia.

Former Queensland premier Peter Beattie, touted by some party insiders as a potential successor to Ms Gillard, cautioned Labor to “hold its nerve” in the face of flagging voter support.

He warned that a leadership change would bring down the government and provoke an early election.

“Julia Gillard is the best person to lead this country,” he said.

Mr Beattie eased the pressure on Ms Gillard by declaring he had no interest in running for federal parliament.

Ms Gillard is having none of what she described as “fevered speculation”.

“I’m the best person to do this job and I’ll continue to do it,” she said.

The prime minister said her minority government would run its full term, with her as leader, until an election due in late 2013.

Ms Gillard denied anyone in the Labor caucus had spoken to her about concerns about her leadership.

“They expect leaders to make tough decisions even if those decisions aren’t always popular in the short term,” he said.

Dr Emerson insists Labor can win the next election, saying there was a contrast between Ms Gillard and Opposition Leader Tony Abbott, who he described as “a rank opportunist”.

Cabinet colleague Tony Burke said the government had been “governing well” and he “absolutely” had confidence in Ms Gillard.

“We’ve got a challenge at the moment which was not seen coming as a result of this High Court decision,” he said.

“If she lacked authority, the people who are quoted would have put their names to the story,” he said of newspaper reports.

“She’s the right person at the right time for this nation,” he said.

But the factional powerbroker, who helped Ms Gillard topple Mr Rudd in June 2010, refused to be drawn on questions about his own leadership aspirations.

“We’re not going to get distracted by the headlines,” he said.

Opposition frontbencher Andrew Robb said the unrest in the government ranks was dangerous and unsustainable.

“At the moment this is a country virtually without a government,” he said.

He warned a “really dysfunctional government” was harming the national interest.

Ms Gillard is facing strong opposition from the party’s Left faction as the government prepares to consider what to do about its asylum seeker policies.

The prime minister won’t rule out a return to the Howard government’s so-called Pacific solution by reopening processing centres on Nauru and Manus Island.

Australian Greens leader Bob Brown said he was standing by the prime minister and Labor in future if there was a leadership change, because the party wanted to keep stable government.

“Unlike Andrew Wilkie, who’s indicated there could be a change of horses, that’s not on our agenda,” Senator Brown told ABC Television.