The federal government is expected to raise taxes and charges in the May budget as the company tax take slides and public demand for services rises. 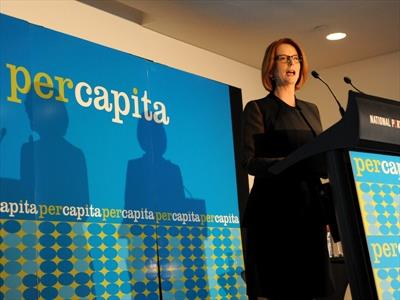 PRIME Minister Julia Gillard is preparing the political ground for higher taxes and charges, saying the government has “urgent and grave decisions” to make in the upcoming federal budget to plug revenue holes.

Her warning on Monday triggered opposition anger and prompted calls from the public sector union and federally funded sectors such as universities to leave them out of the mix.

But the prime minister warned “everyone” would be asked to contribute to the budget task as Labor searches for money to fund its multi-billion schools funding and disability care programs.

The key challenge is a huge forecast drop in revenue growth over the next four years, with the amount of tax collected for 2012/13 now expected to decline by $12 billion.

“I have expressly determined we need to have every reasonable option on the table to meet the needs of the times, even options previously taken off the table,” Ms Gillard told the Per Capita Forum in Canberra.

Ms Gillard did not discuss specific measures, but ruled out changes to the GST.

“I find these decisions both urgent and grave,” she said.

With the election due in September, Ms Gillard stressed the budget would not present as a “political pamphlet” but as a plan to make the “necessary investments in the nation’s future”.

Shadow treasurer Joe Hockey said the obvious areas to be hit were superannuation, capital gains tax on the family home, death duties and measures outlined in the Henry tax review still to be acted upon.

“Julia Gillard believes that nothing should prevent her from spending more money and if she has to hit people with higher taxes or other challenges to their everyday living so be it,” he told reporters in Sydney.

Mr Hockey said this would damage the business investment environment and consumer confidence.

The budget will be handed down on 14 May by Treasurer Wayne Swan, who told reporters, “We’ll do what’s right for the country”.

Asked at the forum if the budget changes would affect the poor, Ms Gillard said the government would take a “Labor approach” to burden-sharing.

Economists are predicting a budget deficit of between $10 billion and $25 billion for 2012/13, which could mean further deficits in following years.

But Ms Gillard said Labor was committed to its medium term goal of delivering budget surpluses on average over the economic cycle.

“Cutting their budgets might help balance the government’s books, but in the end the losers will be the public who rely on these services every day,” she said.

Universities Australia chief Belinda Robinson said the sector had already faced a $3.8 billion hit this year and should be quarantined from any further cuts.

“We are not in the business of ruling things in or out because we don’t know what we are going to inherit,” he said. – AAP