Prime Minister Julia Gillard was talking, but how many people were listening? 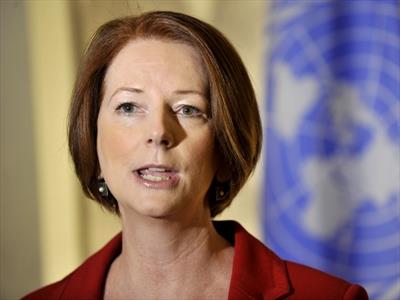 Prime Minister Julia Gillard was talking, but how many people were listening?

As the Australian leader made her maiden speech to a half-empty United Nations General Assembly hall in New York on Wednesday, it was her final opportunity to garner mass support for Australia’s UN Security Council (UNSC) campaign.

“Australia’s ideals in the world are those of the UN – and Australians know the practical value of the UN’s work,” Ms Gillard said during her 15-minute address.

“This is why Australia seeks to serve – in all the work of the UN – and on the Security Council.”

Four years’ work and more than $24 million has been invested in Australia’s bid for a 2013-14 seat on the council, but despite lobbying at the highest levels, there are no guarantees ahead of the October 18 poll of 193 member states.

Following the prime minister’s address, Foreign Minister Bob Carr said of Australia’s chances: “There are a lot of political cross-currents in this. I find it even harder to tip than a hard-fought Labor Party branch rank and file preselection.”

Ms Gillard outlined Australia’s long-standing commitment to peace and security in line with UN ideals. Her speech touched on the war in Syria, the Palestinian impasse, and Iran’s nuclear ambitions.

She highlighted Australia’s fight against poverty, malaria, gender inequality and global conflict, and said her country was on target to achieve Millennium Development Goals by the 2015 deadline.

Earlier on Wednesday, Grand Duke Henri, of Luxembourg, one of Australia’s rivals for a Security Council seat, mirrored the same issues in his General Assembly address and discounted the importance of his nation’s size in discussions of its bid.

“Size does not matter when it comes to the commitment to effective multilateralism,” the regal leader said of his landlocked western European nation, which has a population of about 500,000.

Eleven years in the making, Luxembourg’s bid, if successful, would see it take a council seat for the first time in a UN association stretching back to 1945.
Australia has served four terms on the council, its most recent in the mid-1980s.

Australia’s other rival for the two UNSC seats, Finland, put its case on Tuesday.

“We believe that as a small and military non-allied member state, we have got what it takes,” President Sauli Niinisto told the assembly.

On Wednesday, Ms Gillard was appointed one of nine champions of the United Nation’s global education initiative by UN Secretary-General Ban Ki-moon.

Ms Gillard said the appointment was a significant tribute to Australia’s work in improving education in developing countries through aid programs.

“In my discussions with the secretary-general, I’ve told him that for my country, improving education is a great national priority — one we want to share with our neighbours and partners in the world,” she told the launch.

“The secretary-general emphasised the important role Australia has played on peace and security issues in the Pacific region and beyond,” said a statement issued for Australia by the UN Information Centre. – AAP