A magistrate in Australia has overturned a fine issued to Gary the goat after he took a fancy to flowers outside Sydney’s Museum of Modern Art. 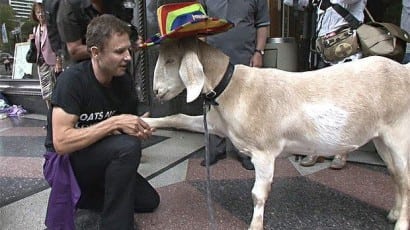 A GOAT accused of eating flowers in central Sydney has had his day in court and beaten the rap.

James Dezarnaulds, aka Jimbo Bazoobi, was issued with a $440 fine on August 22 after police caught his goat Gary chomping on flowers outside Sydney’s Museum of Contemporary Art.

But the case was dismissed in Sydney’s Downing Centre Local Court on Wednesday.

Magistrate Carolyn Barkell said the accused goat had been eating the flowers when police arrived.

“I accept that he did eat garden plants,” she said.

However, she said there was no evidence Mr Bazoobi brought Gary there with the intention of vandalising vegetation.

“He may have preferred to have an ice cream,” she said.

Lawyer for the goat, Paul McGirr, told the court that police had issued the wrong infringement notice, because it related to a person and not a goat.

He also said it couldn’t be proved that Mr Bazoobi put Gary up to the act.

“We can’t guess what Gary might have been whispered in his goat ear,” he said.

He told reporters he bought his sidekick for a case of beer last year in Gingin, WA. Mr Bazoodi expressed his relief on ‘Gary the Goat’s’ Facebook page: “We won! … Updates soon but in the meantime, Jimbo and I are going to get on the beer and grass tonight.”

A message left in support offered congratulations from the UK: “Congratulations Gary & Jimbo from all your new fans in the UK! Enjoy the beer.”

The magistrate dismissed Mr Bazoobi’s application for the crown to pay his legal costs but cancelled his fine.

The goat, who was met by a throng of reporters outside court, was not required to give evidence and made no comment on the verdict. – AAP