Prime Minister Julia Gillard has announced a new joint taskforce designed to crackdown on gang-related crime across the country, with police directed to seize the assets purchased with the proceeds of crime in an effort to cripple organised criminal networks operating within Australian society. 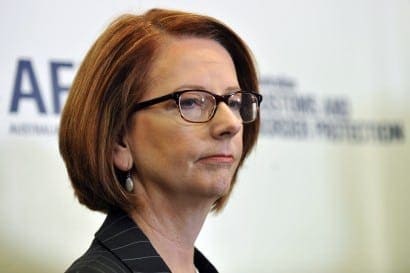 PRIME Minister Julia Gillard has announced a new joint taskforce designed to crackdown on gang-related crime across the country, with police directed to seize the assets purchased with the proceeds of crime in an effort to cripple organised criminal networks operating within Australian society.

Gillard joined Home Affairs Minister Jason Clare and Australian Federal Police Commissioner Tony Negus in confirming the new taskforce, which she said was closely modelled on the FBI’s Violent Gangs Safe Street Taskforce which has made over 55 000 arrests since its inception in 2001.

The Prime Minister said that she believed that a joint taskforce was needed to combat the growing issue of organised crime, with the most significant criminal syndicates operating across a number of different state and federal jurisdictions. The taskforce was formed based on the recommendation of Commissioner Negus, who advised Gillard that the best way to combat organised crime was through the fostering of closer relationships between government agencies.

The Home Affairs Minister Jason Clare told The Sunday Telegraph that it was important to implement an asset forfeiture element to the $64 million taskforce’s operations, claiming that stripping criminals of their material possessions would serve as a disincentive to become involved in illicit activity.

Clare said: “Money creates power in the criminal underworld and if police have more power to seize assets it will shift that balance. The more power police have to seize their cars, their cash, their jet skis and their houses will make a real difference. People don’t care which level of government is responsible for what – they just want this problem addressed.”

Asset forfeiture has become a standard practice for law enforcement agencies in the USA, where the funds obtained from confiscating goods acquired through criminal activity is usually given directly to the police force responsible for investigating and arresting the individuals involved. Police agencies may receive up to 80% of the profits from asset forfeiture programs.

Police in the United Kingdom also utilise asset forfeiture schemes in their fight against organised crime. Leicestershire Police last week listed a light-aircraft that had been used for importing cocaine on auction site eBay for £12 000 and claimed to have earned over £600 000 from selling goods confiscated from criminals. Detective Inspector Greg Maides said that the profit made through these sales was typically funnelled into community projects ranging from law enforcement to social services.

Maides said: “It is relatively common to confiscate a criminal’s car, but it’s not often that we make an application to seize a plane so we can’t really predict how the bidding is likely to go. That said, whoever does buy it will do so knowing that their money is being put to good use.”

The joint taskforce will establish strike teams in Sydney, Melbourne and Brisbane with liaisons in place in the other state capitals. It will involve around 70 members from a range of government agencies including the Australian Federal Police, the Australian Crime Commission, Customs, the Department of Immigration, Centrelink, the Australian Tax Office and state police.

The establishment of this joint taskforce comes days after collaboration between federal agencies and the NSW state police led to the seizure of a record 585 kilograms of methamphetamines worth around $438 million. Clare pointed to the success of this joint operation as an indication that the government’s moves to improve inter-agency cooperation would have a significant impact in combatting organised crime.

An Australian Crime Commission report released this week noted the insidious nature of organised crime in Australian society, claiming that members of the Rebels bikie gang had infiltrated “positions of trust” in a number of government agencies including the Department of Defence.